'We have found hell': trauma runs deep for children at dire Lesbos camp

'We have found hell': trauma runs deep for children at dire Lesbos camp 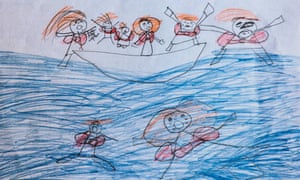 The drawings tell of trauma. Stormy seas dotted with terrified faces. Lifeless bodies of children floating among the waves. And planes dropping bombs, down on to homes and on to people. Eyes that weep blood.

The pencil scrawls were made by children who are part of a growing phenomenon in the Moria refugee camp in Lesbos, Greece. All have attempted suicide or serious self-harm since they came to this place.

Approximately 3,000 minors live in the Moria camp, which Médecins Sans Frontières (MSF) calls a giant open-air “mental asylum” owing to the overcrowding and dire sanitary conditions. Last Tuesday an adolescent attempted to hang himself from a pole. In August, a 10-year-old boy only just failed to take his own life.

The camp, among hills dotted with olive trees a few kilometres from the island’s capital town of Mytilene, is home to 9,000 asylum seekers living in a centre designed to hold one third of that number. Migrants live in groups of up to 30 people, crammed into tents or metal containers situated just centimetres apart. Rubbish, scattered everywhere, makes the air almost unbreathable. Read more>>>