Greek refugee camps 'beyond desperate' as islanders protest in Athens

Demonstrators from islands including Chios, Lesbos and Samos lead protests in Athens and demand government acts

Humanitarian groups have warned of a looming emergency on Greece’s eastern Aegean islands, the day after residents converged on Athens in protest at policies that have led to thousands of migrants and refugees being marooned in reception centres. A surge in arrivals from neighbouring Turkey has seen numbers soar with officials speaking of a four-fold increase in men, women and children seeking asylum on Chios, Kos, Leros, Lesbos and Samos. Conditions are deteriorating in the vastly overcrowded camps in a situation that Médecins Sans Frontières (MSF) on Wednesday warned was “beyond desperate”.

“In Lesbos, entire families who recently arrived from countries including Syria, Afghanistan and Iraq are packed into small summer tents, under the rain and in low temperatures struggling to keep dry and warm,” said Aria Danika, MSF’s project coordinator on the island.

“In our mental health clinic we have received an average of 10 patients with acute mental distress every day, including many who tried to kill themselves or self-harm. The situation on the island was already terrible. Now it’s beyond desperate.” Demonstrators – led by delegations of officials from Chios, Lesbos and Samos – gathered in the Athens sunshine on Tuesday to demand that the government move people out of camps.

“Action has to be taken now, before it is too late,” said Panos Pitsios, president of the town council of Mytilene, Lesbos’s capital. “We are heading towards an eruption, a situation that is on the verge of getting out of control.” 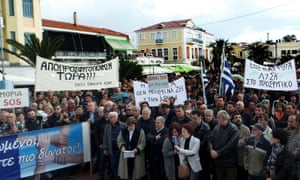 A demonstration in Mytilene on the island of Lesbos. Photograph: Anthi Pazianou/AFP/Getty Images

The island, the gateway for an estimated 800,000 refugees and migrants who entered Europe at the height of the refugee crisis two years ago, is now housing more than 7,000 people in facilities with a capacity of 2,300. The strategy of stranding migrants and refugees in remote camps where tensions have also mounted between rival ethnicities has also been condemned by human rights groups. Organisations increasingly fear that unless asylum seekers are transferred to the mainland where facilities are less crowded and better equipped, thousands could be left out in the cold as winter approaches. As of last week, reception centres on the isles were almost 7,200 over capacity, condemning inmates to live in appalling conditions with lack of access to clean water, sanitation facilities and health services.

Mayors from all five islands said in a proclamation handed to the migration minister, Ioannis Mouzalas, that Athens’ containment policies had turned their communities into “island prisons”. “There has to be immediate decongestion of the islands,” Chios’s mayor, Manolis Vournous, told the Guardian. “There simply isn’t the infrastructure to cope.” About 2,500 people, he said, were currently stuck in Vial, the island’s main camp, purpose-built to hold no more than 800. “It is an intolerable situation that is putting human lives at risk and endangering social cohesion. It has to end.” The leftist-led Greek government argues it is hamstrung by a landmark accord reached between the EU and Turkey to stem the flows last year. Under the agreement, asylum seekers arriving on Greek islands must remain in situ until their requests are approved – a process made longer by a notoriously slow-moving justice system that has been impacted by the country’s long-running economic crisis. The enforced wait is exacerbated by the spectre that, if rejected, asylum seekers will be forcibly returned to Turkey.

In recent weeks, prime minister Alexis Tsipras’s administration has taken steps to alleviate the situation – transferring hundreds of migrants by ship to Athens. Mouzalas recently announced that the government was also considering renting hotels and dispatching cruise ships to the islands to house the growing numbers over the winter months. But with more than 15,000 people officially registered in state-run camps on the isles, the measures were described as “hopelessly inadequate” by locals.

“More than a third of Mytilene’s total population are migrants and refugees,” said Pitsios. “Residents are afraid at night to even leave their homes and now they are at the end of their tether.”