"Protect our laws and humanity!": Open Letter by 85 Organizations

"Protect our laws and humanity!": Open Letter by 85 Organizations 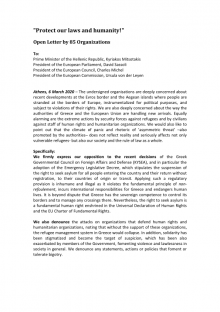 The extreme actions taken by security forces against people seeking asylum and the recent violent attacks against workers for human rights and humanitarian organizations in Greece are an alarming development, said 85 organizations in a joint statement on Friday. They call on the Greek government and its EU partners to urgently change course, respect EU and international law and show solidarity for those seeking safety.

The statement denounces the use of people fleeing violence and persecution, who are stranded at the borders of Europe, as bargaining chips for political purposes. It also criticizes "the climate of panic and rhetoric of 'asymmetric threat'" that has been promoted by Greek authorities. This rhetoric does not reflect the reality on the ground, and it seriously affects not only people seeking asylum, but European society and the rule of law in Greece and the rest of Europe.