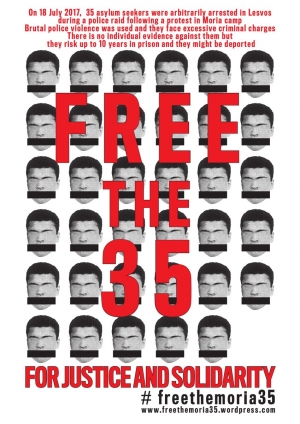 The case of the Moria 35 is about 35 Africans arrested by the Greek Authorities in July 2017 after clashes in Moria RIC. As the trial of the case is about to start on Friday 20 Apr. 2018 in Chios, a campaign has been launched by Greek and International collectivities and organizations for the support of the 35 migrants from Africa. On Saturday 14th of April a demonstration took place in Athens, and on Tuesday 17th of April, a demonstration took place in Mytilene. Also, a documentary on the case has been released recently.

UPDATE: The end of the trial

While all 35 defendants should soon be released from detention, a gross miscarriage of justice took place today at the Mixed Jury Court in Chios, Greece where a ruling of guilty was declared against 32 of the 35 defendants. The 35 were arbitrarily and violently arrested in Moria camp in Lesvos on 18 July 2017 following what started as a peaceful protest in the camp. The ruling comes after what we can only describe as a kangaroo trial implicating the prosecutor and judges of the court who decided to pursue criminal charges despite a lack of any credible evidence against the 35.

32 of the 35 defendants were found guilty of injury to public officials, but acquitted on all other charges. The three individuals detained by a firefighter outside Moria Camp were found innocent of all charges; the testimony against them was discredited as inconsistent and not credible as the firefighter misidentified the defendants he had arrested, before being corrected by the court.

Read the rest of the LCL Press Release >>>

First day of the trial in Chios.

The trial started but two defendants were absent since they were still in Athens, so after the reading of the charges the Court decided to adjourn to Monday. As has been reported by Legal Center Lesbos, which was present at the courtroom, the interpreters during the trial were not enough for all the defendants and the charges were translated only as short summaries. 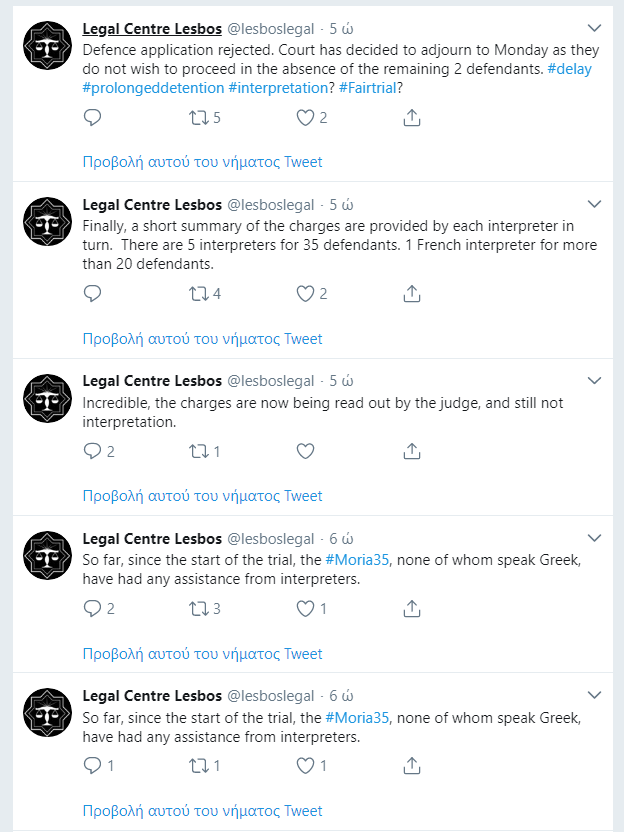 During the first day of the trial solidarity actions took place in Athens, Thessaloniki and in other cities in Europe and the US and they were published on Twitter as part of the campaign #freethemoria35

See below some of these tweets:

- Demonstration at the 'Petrou Ralli'  pre-removal detention center in Athens 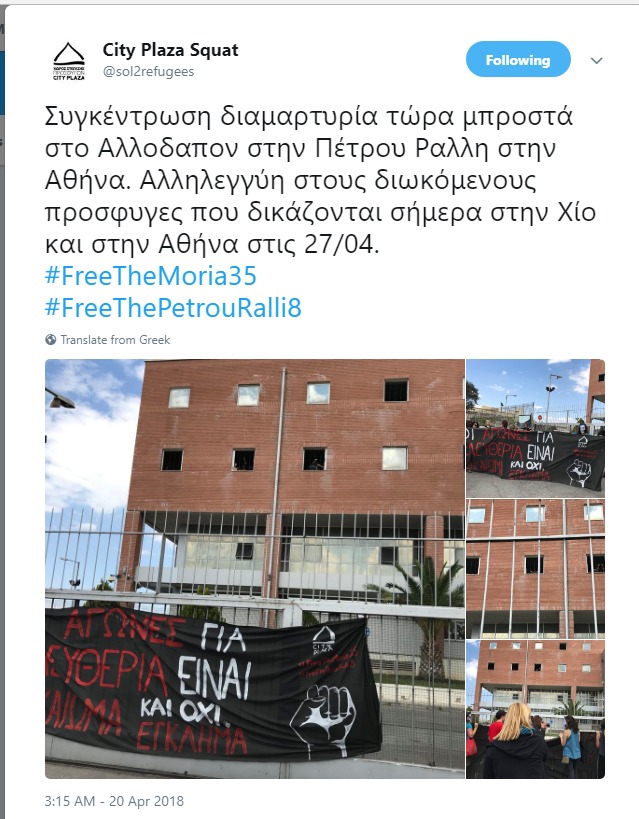 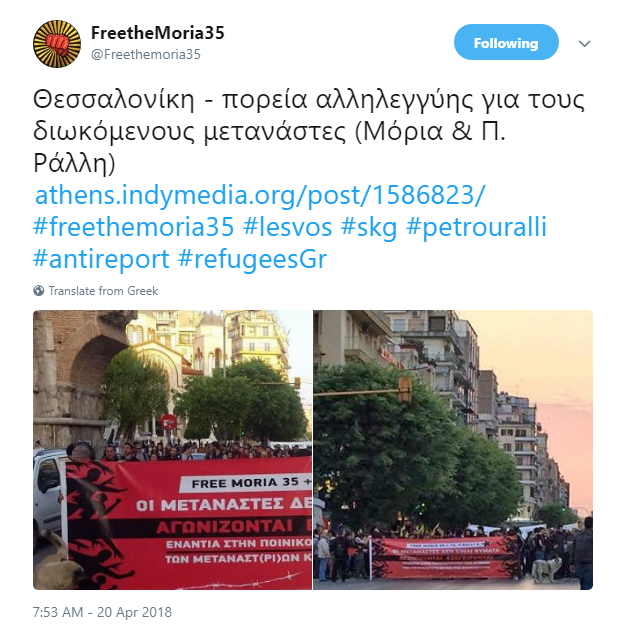 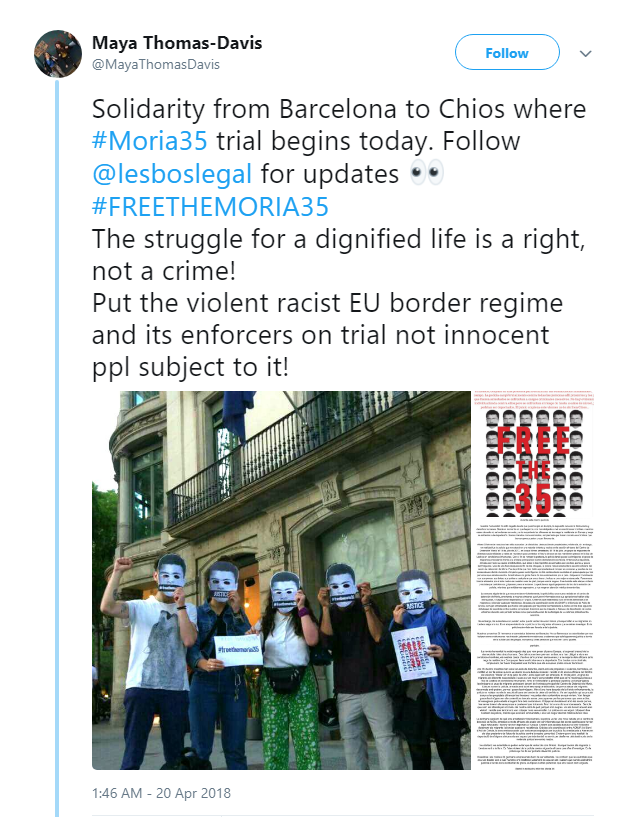 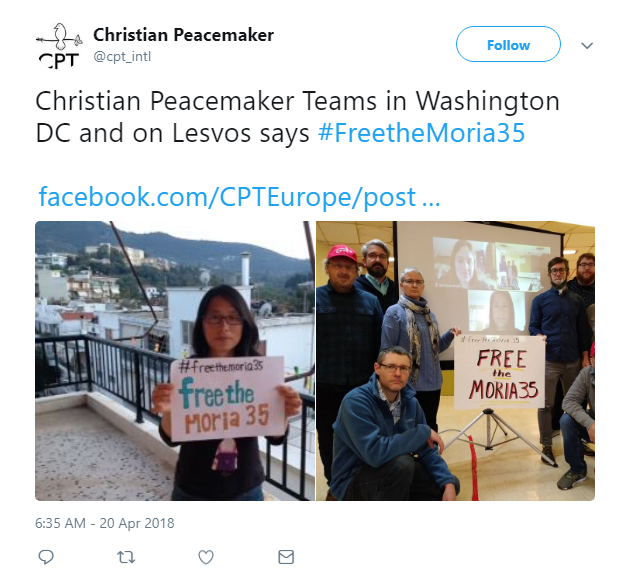 Read the following accounts and articles on the moria 35 case - download the attached statement by 5 of the 35 defendants:

Who are the Moria 35? | freethemoria35.wordpress.com

On 18 July 2017, police violently raided the overcrowded open-air Moria Detention camp on the island of Lesbos in Greece, arbitrarily arresting 35 individuals – the vast majority of African-origin or descent.  This, in response to a peaceful protest earlier that day by Refugees of all nationalities for freedom of movement and against inhumane camp conditions, which was also met by police brutality, outside the EU Asylum Office. Many of those arrested were not even present at the protest.

To highlight the seriousness of this case and the extent of police violence, Amnesty International have called on Greek authorities to immediately investigate excessive use of force amounting to possible torture.  An investigation has now been opened into dangerous bodily harm committed by unknown police officers.

The Moria 35 each face criminal charges which may lead to up to 10 years in prison, exclusion to the right to international protection and deportation to countries they fled.

For more information watch these videos in Greek or English and follow the hashtag #freethemoria35!

On Tuesday 18th July 2017, 35 refugees in Moria camp, Lesvos, were arrested. For the second day in a row, protesters sat outside the European Asylum Support Office inside the camp, holding banners denouncing dehumanising conditions, and calling for freedom of movement for those kept on the island for over 6 months. Following this peaceful exercise of the right to protest, there were clashes between a handful of protesters and Greek riot police. Police forces then carried out raids of Isoboxes, and made 35 arrests. Images and videos showing police using excessive force during clashes with protesters and brutal violence during raids and arrests including beatings with police batons and boots, have been published in international media and on social media.Many of the 35 arrested were not present at the morning’s peaceful protest, let alone the clashes between a small number of protesters and riot police that ensued. This led observers to conclude the arrests were arbitrary; people were targeted because of race, nationality, and location within the camp at the time of police raids. 34 of the 35 people arrested were black. Many of the 35 report having been brutally beaten by police during raids, arrests and/or in police custody. 11 have filed official complaints of police brutality, and forensic medical examinations have been ordered. One individual was hospitalised for over a week, and many have needed urgent medical attention. Given the mounting evidence of police brutality, Amnesty International has published a report urging Greek authorities to conduct an immediate investigation into allegations of excessive use of force amounting to possible torture: https://www.amnesty.org/en/documents/eur25/6845/2017/en/ 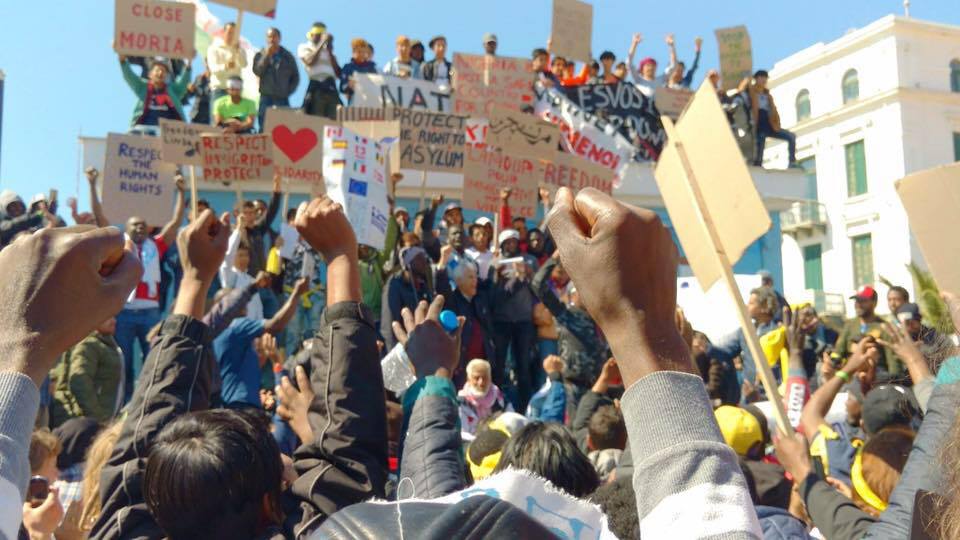 “On the 20 April, we are scheduled to attend trial in Chios after waiting nine months, trapped on Lesvos, while 30 of our brothers unjustly have waited in prison for this same time period.  Our humanity has been denied since we stepped foot in Europe, the supposed cradle of democracy and human rights. . . We are treated like criminals, simply for crossing a border that Europeans can freely cross.” An excerpt from the Statement by 5 of the Moria 35 Defendants.

Today begins the trial of the Moria 35, which will determine the fate of 35 individuals arrested following a protest outside the European Asylum Support Office (EASO) in Moria Refugee Camp on 18 July 2017. The stakes are high in this inherently political trial. The 35 face criminal charges for which they may receive 10 years in prison and probable deportation if found guilty.

As the largest of the ‘hotspot’ islands in Greece, Lesvos has been directly affected by the EU-Turkey Statement of 18 March 2016. Since its implementation just over two years ago, the island has transformed into a place of hostile containment. The direct effect of the ‘deal’ has been to prevent those who have irregularly entered Greece from continuing to the mainland.  Applicants remain on the island whilst their applications for asylum are considered and determinations made regarding the suitability of their return to Turkey.

Whilst we welcome Tuesday’s decision by the Greek State’s Council to lift geographic restrictions for new arrivals to the Greek islands, the practical application of this decision remains to be determined.

Struggling for a dignified life is a right, not a crime! The Moria 35 punitive trials | Open Democracy | 14 Apr. 2018

34 of the 35 arrestees are black; all of them have been charged with the exact same criminal offences despite the lack of evidence of their individual participation in demonstrations. On July 18, 2017, 35 migrants were arbitrarily arrested after a series of protests outside the European Asylum Support Office, organized from inside the Moria detention center. Coming from different parts of the world but trapped under the same circumstances, many people united and mobilized to denounce both the unlawful delays in their asylum applications and the appalling conditions under which they’ve been forced to live in the meantime.

Greek state authorities responded to this peaceful exercise of the right to protest with repressive violence. Humanitarian actors were evicted from the camp, which was put on lockdown: trapping the majority of protesters outside and imprisoning a small group within, along with other residents resting in their isoboxes who had not participated in the demonstration. Police used quantities of teargas that made it painful to breathe even at the distance of the hill overlooking the camp. Officers were filmed gathering rocks from the ground and throwing them at protesters, who attempted to resist: taking shelter between the rows of isoboxes and trying to extinguish tear gas canisters with UNHCR buckets filled with water.

By around 3pm everything appeared to be calm, and people were observed walking calmly around the camp again. Then, an hour later, armed riot police entered Moria. They targeted and violently raided the ‘African section’ of the camp: forcibly entering isoboxes, dragging people out, shooting teargas at close range, and brutally assaulting seemingly every individual they came into contact with, including a pregnant woman. From the hilltop overlooking the camp you could hear disturbing screams and shouts. You could see terrified people fleeing the ‘African section’ in every direction, only to be intercepted in the open space to the left of the isoboxes, or on the main pathway through the camp, and beaten to the ground by an officer soon joined by three or four more. For approximately 10 minutes, everywhere you looked groups of police officers in full riot gear were gathered around individuals already lying on the floor – some barefoot or in their underclothes – kicking and beating them with their boots and truncheons.

GREECE: AUTHORITIES MUST INVESTIGATE ALLEGATIONS OF EXCESSIVE USE OF FORCE AND ILL-TREATMENT OF ASYLUM-SEEKERS IN LESVOS | Amnesty International | 28 Jul 2017

Amnesty International calls on the Greek authorities to urgently investigate allegations that police used excessive force against asylum-seekers in the Moria camp near Mytilene during a protest on 18 July 2017 and ill-treated some of those who were arrested and detained in the Mytilene police station following the clashes that ensued. Testimonies the organisation collected from victims and witnesses about excessive use of force in the Moria camp are also supported by audio-visual material that was made public in the media in the days after the protest.