During our Monitoring Mission in the Aegean Sea, the Sea-Watch crew has put special attention on the so-called HotSpots. This article gathers reports about the dramatic situation in the biggest of these camps: Moria, Lesbos. We urge the Greek government to close down the prison-like camps and transfer people to the mainland before winter is coming!

In light of the EU-Turkey deal, Moria has become a prime example of Europe’s new refugee policy of exclusion. Once a place of transit, Lesbos has turned into an open-air prison for thousands of refugees seeking a better life. Many have spent months waiting to be granted transfer to the mainland of Greece or to Northern Europe. At current, Moria is severely overcrowded – with 5000 people spilling out of facilities built for only 2300. Numbers are increasing rapidly with more than 120 refugees arriving daily. This leads to problems such as a lack of adequate water and sanitation which contributes to a rapid spread of disease as well as and increased tensions among the inhabitants. The situation is dramatically worsening as winter approaches, and with it, no doubt unnecessary deaths. 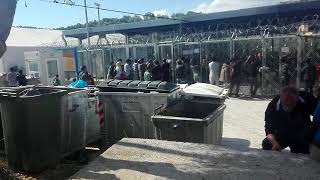 “Living in Moria makes us all sick. In the morning you wake up in a cramped tent or container between other people. It smells disgusting and I hate that I cannot even wash myself properly. In winter it is freezing. Everything is soaked. When you wake up you cannot move your limbs. And you’re covered in ashes. Last winter we burned paper and plastic to stay warm. It is as if we were not human beings.” 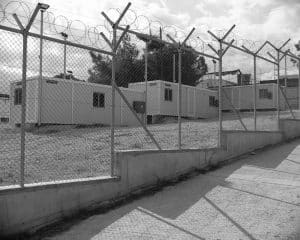 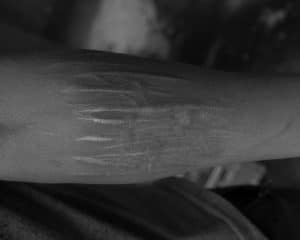 The arm of a Pakistani refugee shows marks of auto-aggressive behavior. His comment: “It is this life, this place”. Photographs: Roman Kutzowitz. 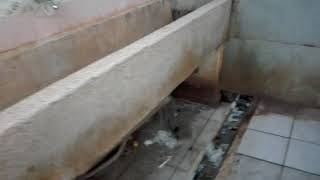 video shared with Sea-Watch by a detainee in October 2017 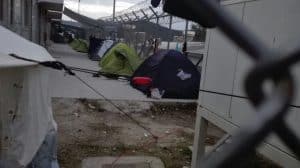 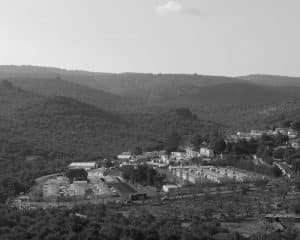