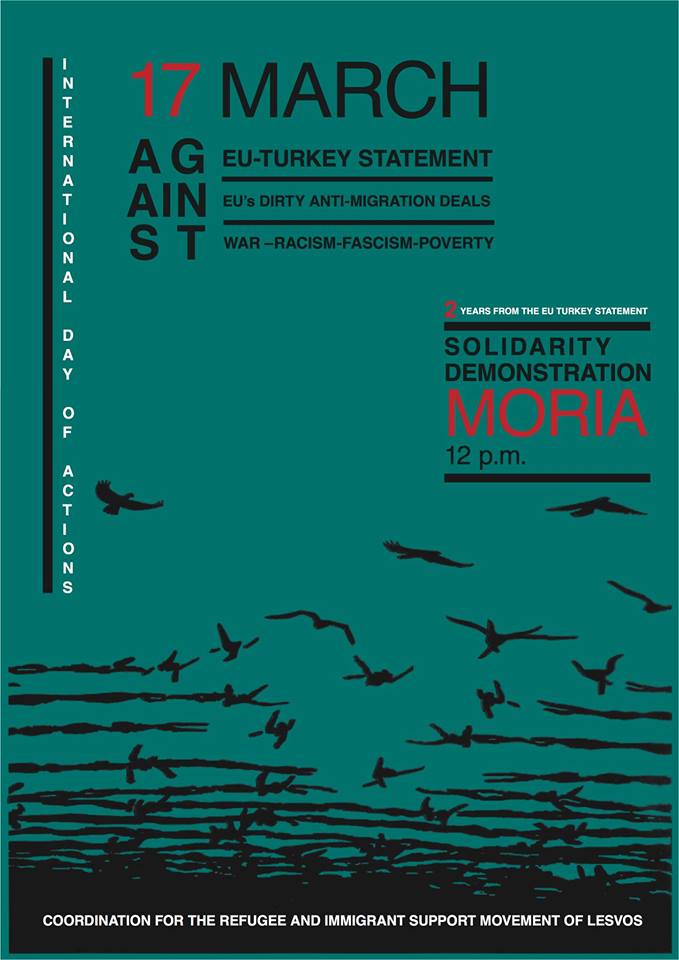 UPDATE:  CHANGE OF LOCATION: The solidarity demonstration on Saturday 17 December will take place at SAPFOUS SQUARE, 12.00.

Overcrowding and bad living conditions lead to increasing tensions in Moria camp. Families with children were fleeing fights and teargas last night. The current situation in Moria camp is a direct result of the EU-Turkey statement and puts the life and safety of thousands of people at risk.

In light of what happened last night and earlier this week, we are moving the solidarity demo to Sapphous Square, Mytilini.

INVITATION - LOCAL COORDINATION FOR REFUGEE AND MIGRANT SUPPORT LESVOS
2 years after the EU-Turkey deal came into force, we invite you to join us for a demonstration outside Moria camp. On 17 March, people will come together all over the world to show solidarity with refugees and migrants who are imprisoned, who are mistreated and tortured, and who lost their lives as a result of EU’s dirty anti-migration deals.

We will demonstrate outside Moria against the EU-Turkey deal, which has turned Lesvos into a prison island. The living conditions in Moria camp are inhumane and unacceptable. We demand to open the islands and to have adequate reception on the mainland for refugees, outside of detention facilities. Other European countries must show solidarity and must allow refugees from Greece to relocate in their countries, including through family reunification.
We say “no” to detention hotspots. We say “no” to deportations to Turkey and unsafe home countries. We say “no” to police violence and discrimination against migrants and refugees. We fight for justice for all refugees and migrants who were arbitrarily arrested and face criminal charges. All police officers who have committed police violence must be brought to justice.
We will continue to show solidarity and to fight for our right to demonstrate peacefully and without fear.