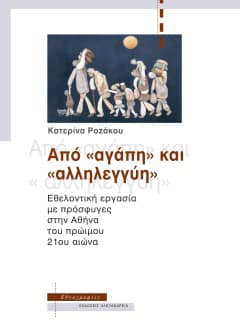 Cite as: Rozakou K., 2018, Out of "love" and "solidarity": Voluntary work with refugees in early 21st century Greece. Athens: Alexandreia (in Greek)

This monograph examines the construction of the volunteer as a moral Greek and European citizen in early 21st century Greece. Narratives of volunteerism and civil society that emerged at that time echoed the modernisation and Europeanisation visions of Greek society. The volunteer emerged as the epitome of the modern citizen, a disinterested subject working voluntarily for the common good. Yet these projects remained fragmented and incomplete in Greece. A certain “lack of volunteerism” was broadly attributed to Greek exceptionalism. The book challenges this dominant hypothesis regarding the presumed underdevelopment of volunteerism and suggests an alternative analytical approach. It shows how the attempts to regularise and institutionalise volunteerism conflicted vernacular forms of public sociality. Based on fieldwork in two associations, the Hellenic Red Cross and Voluntary Work Athens, this ethnographic study explores two different versions of volunteerism, humanitarian and militant volunteerism and their historical genealogies.
Out of “love” and “solidarity” focuses on voluntary work with refugees and on the political production of relationality. The book explores the relationships between refugees and residents of Greece who tried not only to help them, but also to incorporate them in culturally significant forms of social interaction. The monograph unearths “love” and “solidarity” as key formative concepts of public sociality. Drawing upon the anthropological discussion on the gift, this study explores the ways in which the relations between the volunteers and the refugees reproduce, contest and transform dominant modalities of dealing with the “other” such as hospitality.