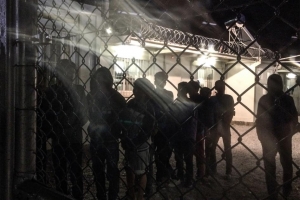 Unaccompanied children line up for an evening meal at a detention facility run by the Greek police. © 2015 Kelly Lynn Lunde

Is it ever acceptable for children to be detained in dark and dirty police cells, without access to the most basic services? Of course not. But when it comes to unaccompanied migrant children, Greek authorities appear to think the answer is yes.

According to the government’s latest figures, published in early September, at least 113 children were detained in so-called protective custody at police stations or police-run detention facilities, waiting to be transferred to a shelter. The number was higher in August, when 142 children were kept in those cells. Human Rights Watch research has documented the detention of unaccompanied migrant children in police cells and other detention centres in Greece, in violation of international and Greek law.

Far from protecting them, this makes children vulnerable to all kinds of abuses, including sexual violence and harassment and increases the risk of further deteriorating their already fragile psychological state. As if that wasn’t enough, we found unaccompanied children in detention are not correctly informed about their rights and have no access to educational or recreational activities.

In response to an open letter from Human Rights Watch in July, Greek Minister for Migration Policy Yannis Mouzalas has pledged that by the end of the year not a single child would be kept in protective custody.

To fulfil this pledge, Greece should use EU funding to provide suitable short-term alternatives to detention, increase the number of places in long-term shelters, and establish a foster family system. Other EU countries have a responsibility to address the situation too. They should make relocating unaccompanied children a priority, speed up family reunification, and broaden eligibility requirements for relocation so more kids can benefit. Unaccompanied children currently in police cells in Greece cannot wait any longer.