Occupy Lesvos: Refugee resistance at the heart of the border regime

Recent acts of dissent within Moria have met with harsh police violence, and few positive outcomes. So the Afghan protesters left the camp, thrusting the continued struggle of detained refugees into the laps of the cocktail-sipping yacht-owners around the harbour.

Facing down threats of eviction and arrest, and violent abuse from an off-duty Moria guard, they won the promise that asylum claims which have dragged on for 12 or 18 months will be resolved within days. If these decisions do materialise, the occupation can be counted as a major victory for self-organised refugee struggle. Novara Media was on the ground for the duration. 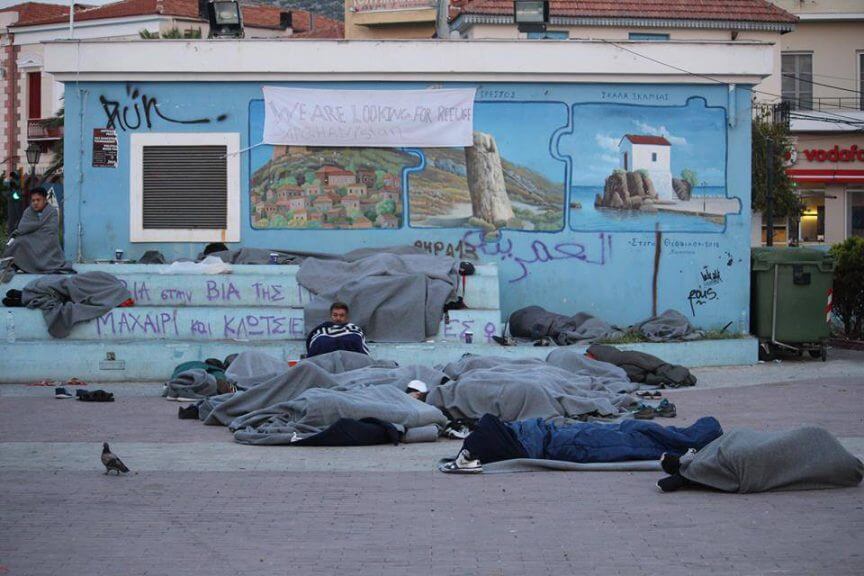 Moria is now 1,000 people over capacity, and growing fuller every day. Given that many inmates were forced to flee their home countries because of their political activism, it is unsurprising the authorities have met with frequent, autonomous dissent.

Victims were spat and stamped upon, subjected to racist abuse, and beaten inside the police station.

Following demonstrations in Moria on 18 July, squads of riot police invaded the camp, hurling stones, firing tear-gas and beating refugees at random. Victims were spat and stamped upon, subjected to racist abuse, and beaten inside the police station. Pregnant women were manhandled. One victim lost consciousness for four hours, waking in hospital in critical condition. Others spent six days in jail without access to a doctor, arriving to court splattered in blood and with open, uncleaned wounds.

Finally, almost all of the 35 arrestees were transferred to prisons across Greece, where they will remain for up to 12 months until their case is heard. All this happened behind closed steel doors, captured only on grainy long-distance lenses and the mobile phones of refugee media activists. The police beat refugees with impunity, then dismissed them as trouble-making rioters.

It is a trap the Afghans sought to avoid. “The police told us to demonstrate inside Moria, but I told them we cannot,” Afghan community leader Said Hashmatullah explained as we sat together in Sappho Square. “We have to inform the European community about our situation and they do not allow journalists inside Moria.”

Instead, they united the collective rage of the 18 July protest with the media savvy of the hunger-strike campaign which saw Bahrooz Arash, Kozhin Hussein and Amir Hampay released from Moria’s Section B detention centre, following 41 days of starvation. Media attention revolved around Arash Hampay, a seasoned human rights activist from Iran who joined the hunger strike in Sappho Square.

With press access to Section B all but impossible, Arash’s highly visible campaign kept up the pressure on the authorities. More than a mere act of solidarity with his imprisoned brother and friends, his strike was necessary to ensure their struggle was not forgotten.

The message to authorities is to create a new border between the stateless residents and the Europeans.

Afghan leaders mentioned the hunger strikers’ victorious campaign as an inspiration. By moving from Moria to Mytilene, under the guise of a simple march behind a banner reading “refugees are not enemies: the enemies are those who make them refugees”, they ensured free access for journalists and curtailed the risk of a violent police response. Most importantly, they sent a clear message of resistance to the authorities’ attempts to create a new border between the stateless residents of Moria and the Europeans in the city below.

The border regime encloses refugees both spatially and temporally, through mechanisms of constraint and disenfranchisement which find their crudest expression in the former military prison at Moria. Conditions are harsh, and chaos and lack of information are endemic, embedded in the asylum system to wear down refugees’ will to resist and exclude them from the political processes which will alter the course of their lives.

There is no asylum system, says one of the asylum seekers.

Afghan asylum-seeker Aarif Mohmand described a typical day in Moria: wake up in a crowded container shared with 28 friends, queue for four hours a day to collect two meagre meals of gritty broth or processed bread, and spend the rest of the time returning again and again to the asylum services to hear no progress has been made on your case. “There’s a schedule for food,” he said, “but nothing for our asylum claims. There is no asylum system.”

Said Hashmatullah explained that many of his compatriots had been waiting on Lesvos for over a year without hearing a decision. “The children can’t get an education, the adults can’t study or work,” he said. “They just sit, queue for food, and eat, nothing else. The people are going crazy as a result. They are ready to kill themselves.”

A recent report by Médecins Sans Frontières found 80% of refugees assessed in Moria had “severe” mental health issues. One-fifth had been tortured, two-thirds had suffered violence, and half of all women had suffered sexual violence. Yet there has been a “dramatic deterioration” in the provision of mental health care, as a “grossly deficient” system aims only to detain and deport refugees wholesale without concern for their well being. Since the EU-Turkey deal was signed in March 2016, reported instances of self-harm in Moria have increased by 600%. Suicides are spoken of, though never officially reported.

It is not illegal to force refugees to sleep in disgusting conditions in Moria for over a year.

The occupation was a direct response to these conditions. As another asylum-seeker, Daud Nashir, put it: “It’s illegal for us to sleep here peacefully for one night, but not illegal to force refugees to sleep in disgusting conditions in Moria for over a year.” The occupiers not only seized space in the heart of the city, refusing to be secluded any longer in Moria, but took back days clogged with queues, bureaucracy and violent crime to share meals, talk with supporters from across the world, and spend time together as a community.

Police controls, drive-bys by busses of riot cops, and the late-night arrival of a drunken Moria guard shouting threats and abuse and swinging punches could not spoil the mood. The protestors sang Farsi resistance songs into the night, while a five-year-old Afghan boy took the microphone to promise he would fly everyone sleeping in the square to Berlin on a magic carpet.

On the third morning the Afghan community leader agreed with the Greek authorities that their asylum cases would be decided in two days – a deadline later extended to next Tuesday. The hope is that the results will come through, that there will be many positive decisions among them, and that other communities will follow suit in demanding their cases are heard. The fear is that the deadline will be ignored or that all the cases will simply be rejected, and that the authorities will then have the protestors where it wants them – in Moria, unable to resist.

A depressing effect of the border regime’s total grip on the asylum-seekers’ lives is to shift the window of political possibility: the Afghans were not campaigning for open borders, or even for positive asylum results, but simply to know the outcome of their cases. But against this bleak backdrop, the asylum-seekers’ struggle is cast into sharper relief.

The police told Said Hashmatullah that Western anarchists must have instigated the protest, making the patronising and racist assumption that the Afghan community was incapable of self-organising. He swiftly corrected them. Despite their long incarceration in inhumane conditions, despite seeing the violence suffered by other protestors at the hands of the Greek police, despite the fact the border regime holds their lives in its hands: this space of resistance was theirs, and theirs alone. Lying on his back and gazing up at the stars over the Aegean Sea as conversation ebbed and flowed around us, Aarif said with a smile: “I already forget what it was like in Moria.”

This work by Novara Media is licenced under a Creative Commons Attribution-ShareAlike 4.0 International Licence