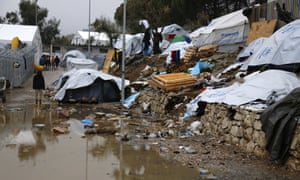 The conditions in which thousands of asylum seekers are being detained on Lesbos has unleashed a furious political backlash in Greece, as financing of the island’s overcrowded Moria detention camp comes under scrutiny.

Tensions mounted after the defence minister, Panos Kammenos, filed a defamation action against three journalists, including the editor-in-chief of the Fileleftheros daily, after the publication of a report alleging misuse of EU funds.

Kammenos, who heads the leftist-led government’s junior partner, the rightwing populist Anel, accused the newspaper of defamation after it linked him to businessmen who had benefited from funds intended to improve living conditions in the camp. Read more>>>