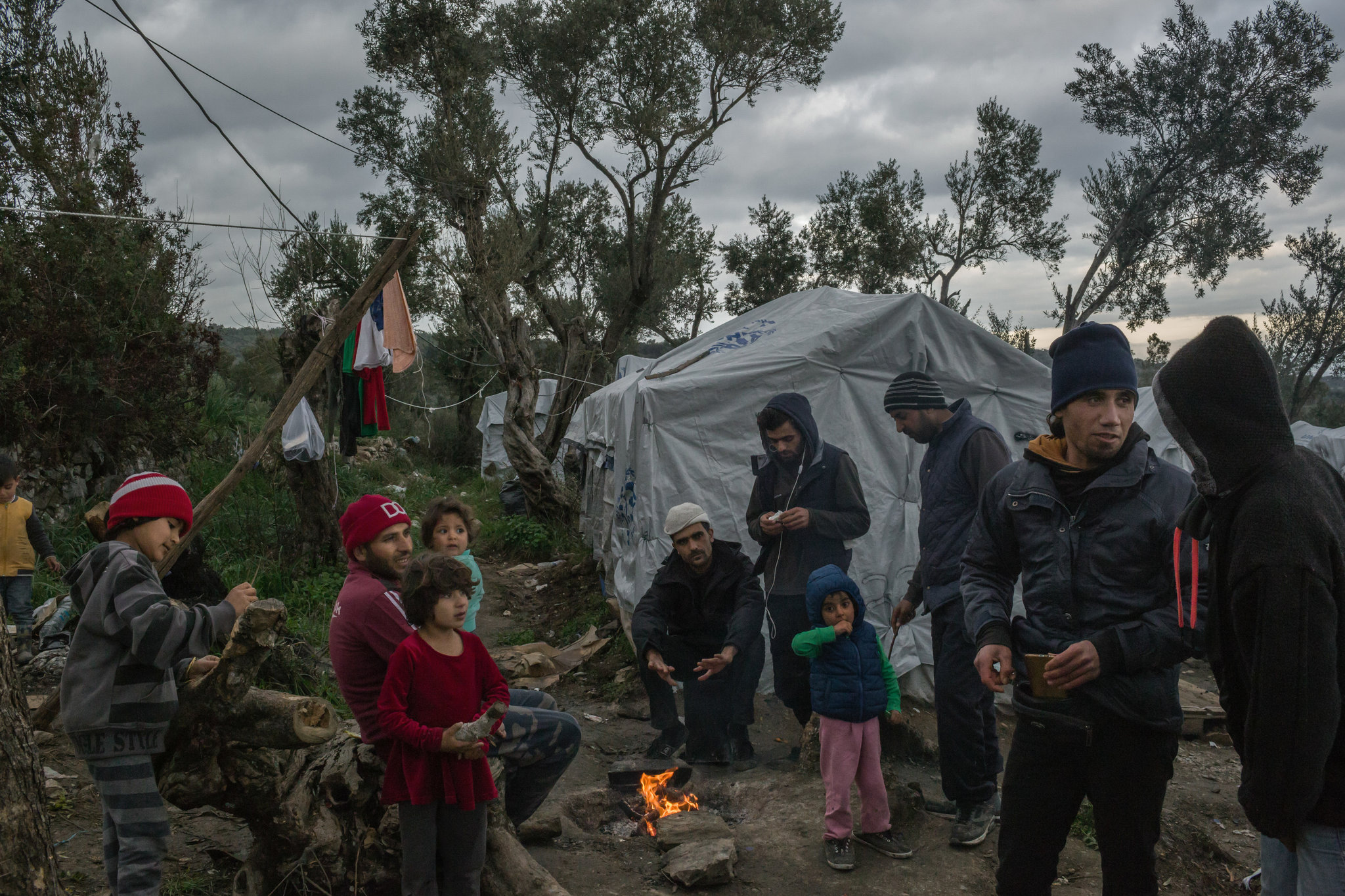 A Syrian family trying to keep warm at a makeshift camp near Moria, on the Greek island of Lesbos. CreditMauricio Lima for The New York Times

His brown eyes sunken and flat, Jahangir Baroch had spent another sleepless night in the metal container on the Greek island of Lesbos where he has lived for more than a year.

“There was no electricity in the container last night,” Mr. Baroch, 26, said desperately, at a center for refugees, away from the holding camp in Moria, where he is housed. “It was like a fridge.”

“I want to go to Athens,” said Mr. Baroch, who came from Baluchistan, an embattled province in Pakistan. “If you don’t want me, I want to go to another country.”

Others are asking the same question two years after the European Union struck a deal with Turkey aimed at cutting off the route across the Aegean Sea for asylum seekers, many propelled by wars in Syria, Iraq and Afghanistan.

Since then, thousands have remained stranded on Lesbos, unwilling to go back to the countries they left, unable to move forward, toward the opportunity they had hoped to find in Europe. Though the numbers are fewer, they keep coming.

The lucky ones, whose asylum applications are accepted, are eventually shipped to the Greek mainland. Those whose applications are rejected (they can apply twice) are sent back to Turkey as part of the deal with the European Union.

But neither country, it seems, has much motivation to accept them. The Greek authorities sift their cases slowly, for months at a time, as the asylum seekers live in limbo, trapped in conditions so deplorable Pope Francis likened them to a concentration camp.

The scale of the migration crisis that brought them to Lesbos can be measured in piles of discarded life vests that still blight the island. But increasingly it is tallied in despair. 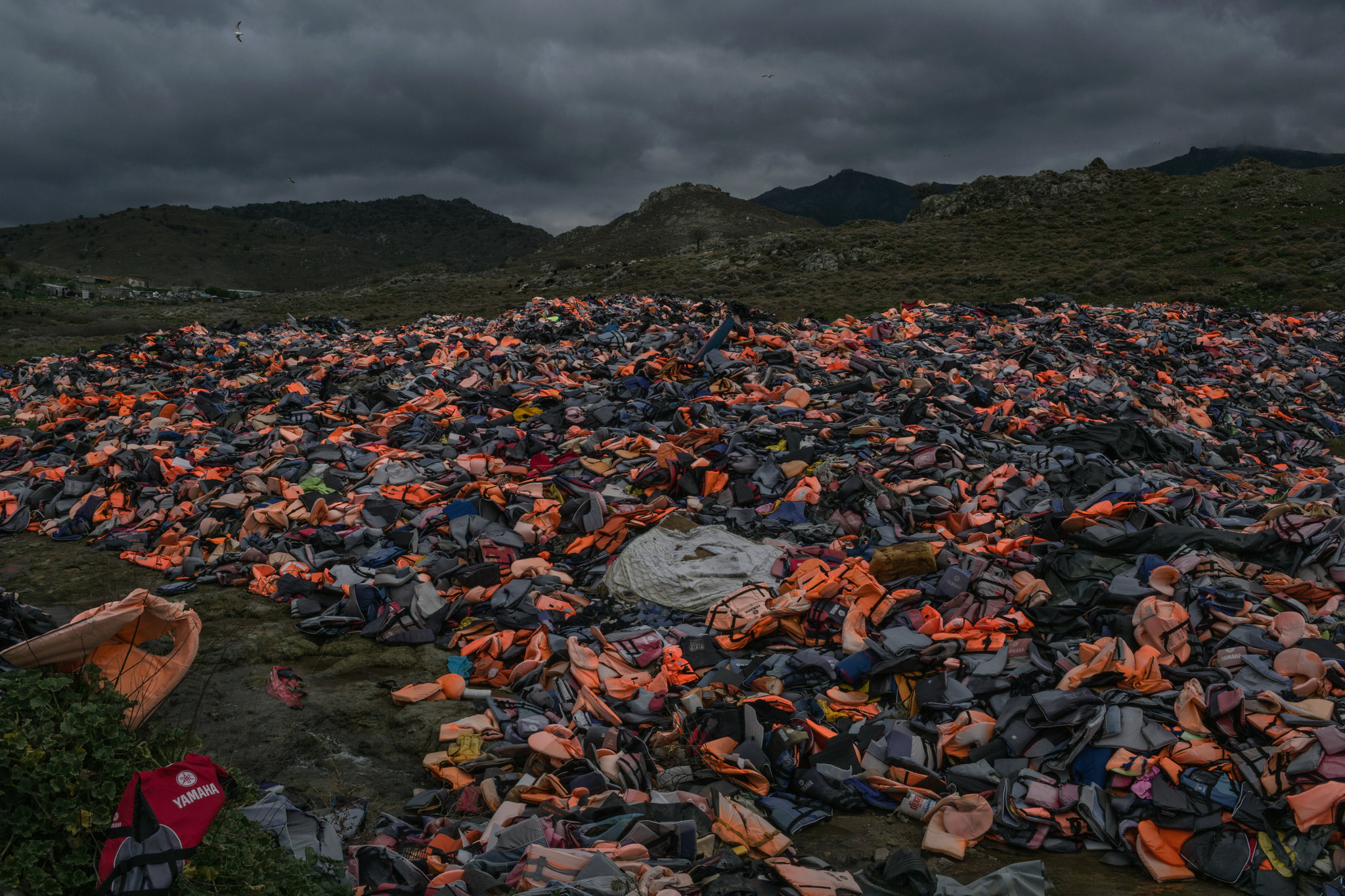 The flotation devices used by migrants who crossed from Turkey to Greece near Eftalou Beach on Lesbos. CreditMauricio Lima for The New York Times 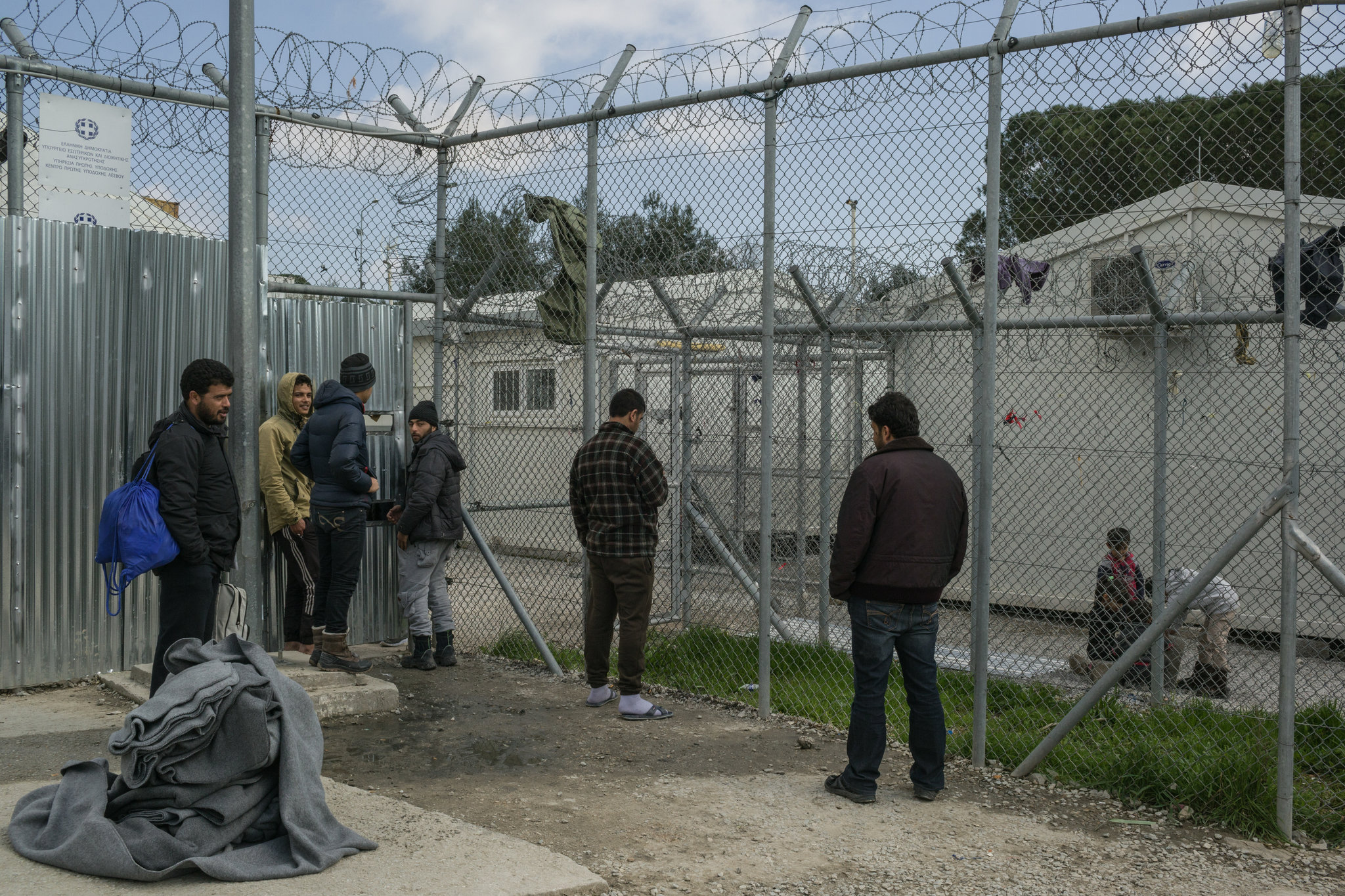 Asylum seekers inside the camp at Moria. Some inhabitants have lived there more than a year. Credit Mauricio Lima for The New York Times

Some 5,500 people are detained in Moria, about 2,500 more than the camp was designed to hold. Greek officials gave us a limited and chaperoned tour of parts of Moria, and numerous people described the conditions they lived in.

Rain soaks through the tents, and there is a lack of electricity and hot water in the showers, even in winter. The public toilets and showers are soiled with feces. As bad as the food is, it often runs out. The lines — for everything — are endless. Fights break out constantly. Violence, theft and rape are constant threats.

Sometimes the men chop wood and light a fire in their tents to try to keep warm, which has led to accidents that killed three people in Moria last year.

“Even if you are healthy, in Moria you’ll get a problem,” said Amir Ali, a 27-year-old from Herat, a city in western Afghanistan, who lived in Moria for more than 11 months.

“That’s not a place to put people in,” he said. “The police cannot control the camp.”

He left Moria, found a job as a house worker and then as a seamster, rented a house in Mytilene, the capital of Lesbos, where he has chosen to stay, his asylum application accepted.

Others have been placed by the state in a makeshift camp, which is not much better, on the fringes of Moria, in an olive grove.

Ali Zaid, 23, an Iraqi from Babylon, has been living in the makeshift camp for more than five months. He left Iraq to flee the Islamic State after his brother was killed, he said.

He showed the outdoor shower, a hose in the open, biting cold of the Aegean winter. The space was covered with garbage, plastic bags and used body soap containers.

Mostly through family and social media, some still follow events back home. Syrians recently protested the siege of the Damascus suburb of Ghouta by the government of President Bashir al-Assad. 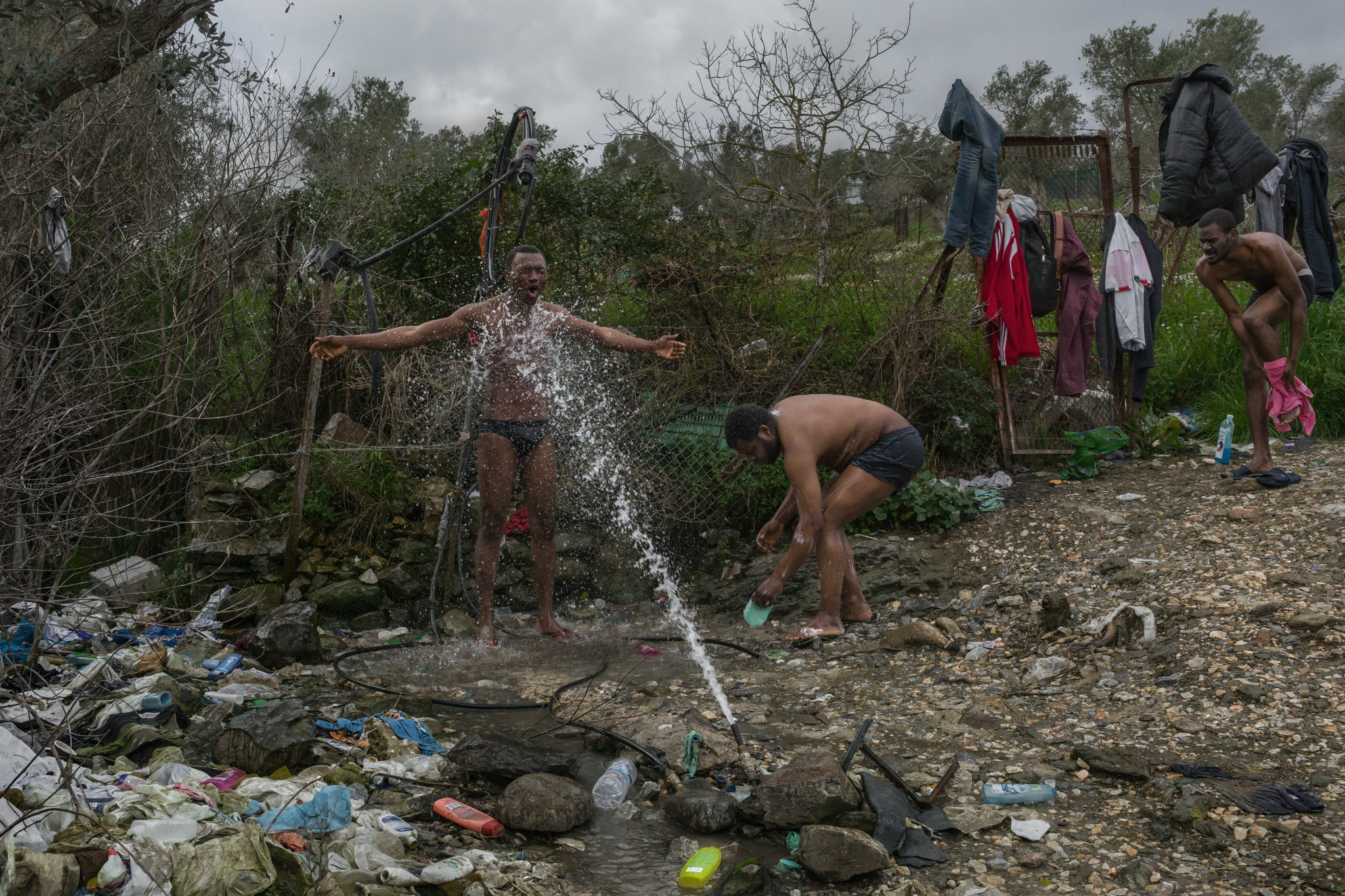 From left, Hermann Fometio, 24, Ulrich Fodje, 31, and Collins Assimi, 30, bathing by the makeshift camp near Moria. The three, all from Cameroon, have been on Lesbos more than three months. CreditMauricio Lima for The New York Times 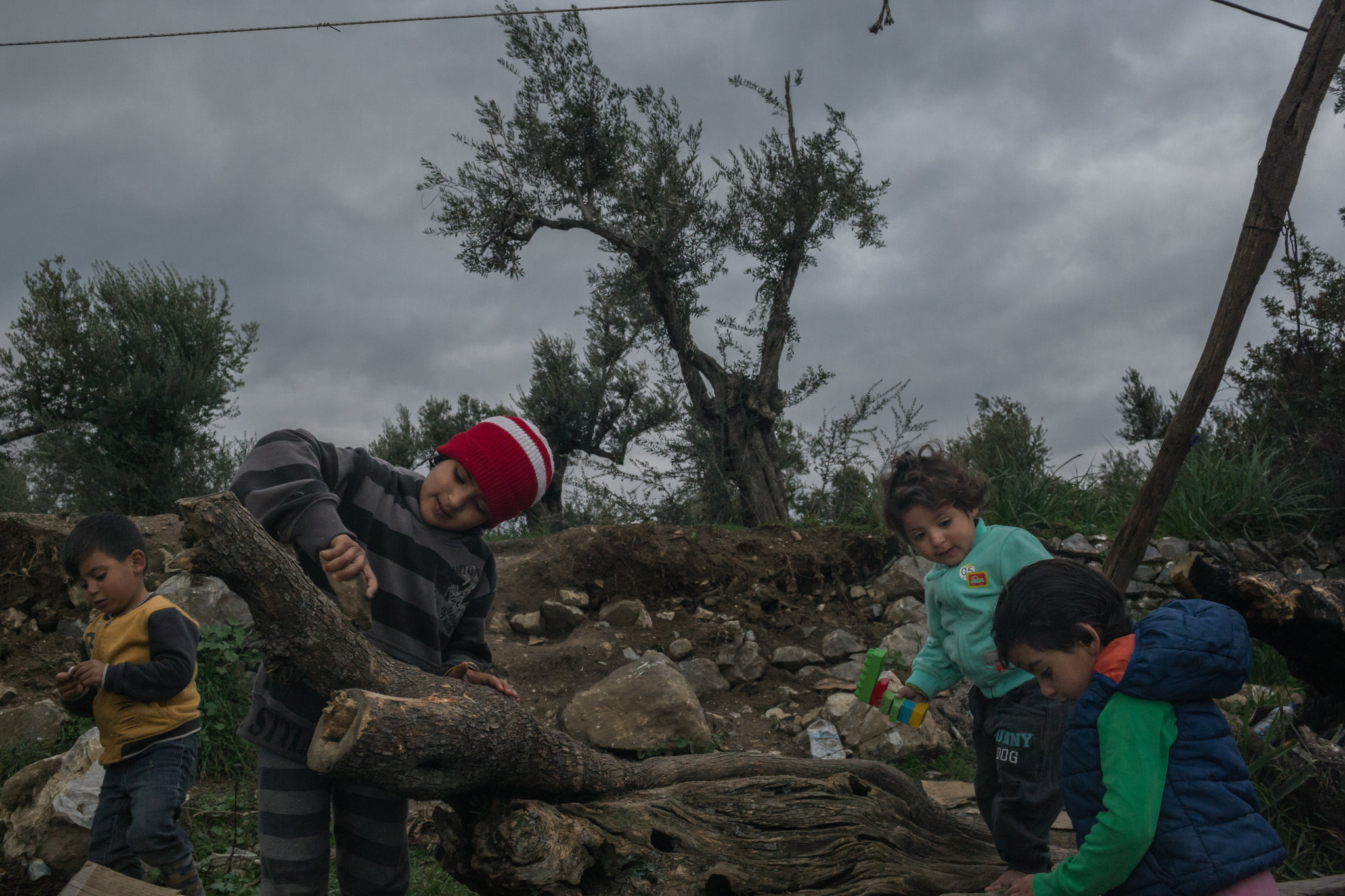 Syrian children from Deir al-Zour playing in the camp near Moria. CreditMauricio Lima for The New York Times

Even having experienced war, Samir Alhabr, a 26-year-old engineer from Iraq, described the makeshift camp as “a very dangerous place.”

He had seen Islamic State fighters execute his father and his brother and witnessed many other killings in Iraq, he said. But life in the camp was only adding to his traumas.

He has started to sleep with his most valued possessions — cellphone, money and cigarettes — all stuffed in his pockets, to avoid being robbed while he was asleep.

The sense of constant insecurity has begun to play on his nerves. He fears for his mental health and went to the camp doctor. He presented papers, in Greek, listing his symptoms:

“I saw, I saw,” he mutters, his eyes wide, though it is unclear what he saw exactly. “But here, I get no help for myself.”

In order to survive, some have tried to build a daily routine with some semblance of normality.

Khalil, 13, lives in Kara Tepe — yet another camp on the island. Originally from Afghanistan, he and his friends ride their bicycles and go fishing along the shore to kill time.

To ease processing and communication, the authorities sometimes try to group the asylum seekers by nationality; sometimes they gravitate toward each other anyway.

Eritreans and Ethiopians have used part of their allowance provided by the European Union, 90 euros per month, to renovate and decorate an Orthodox Church from the 1950s.

As the church is within walking distance of Moria, they pray there every afternoon and, despite their limited food in the camp, they fast from meat and dairy in preparation for the Orthodox Easter.

Others play sports to bond or blow off steam. 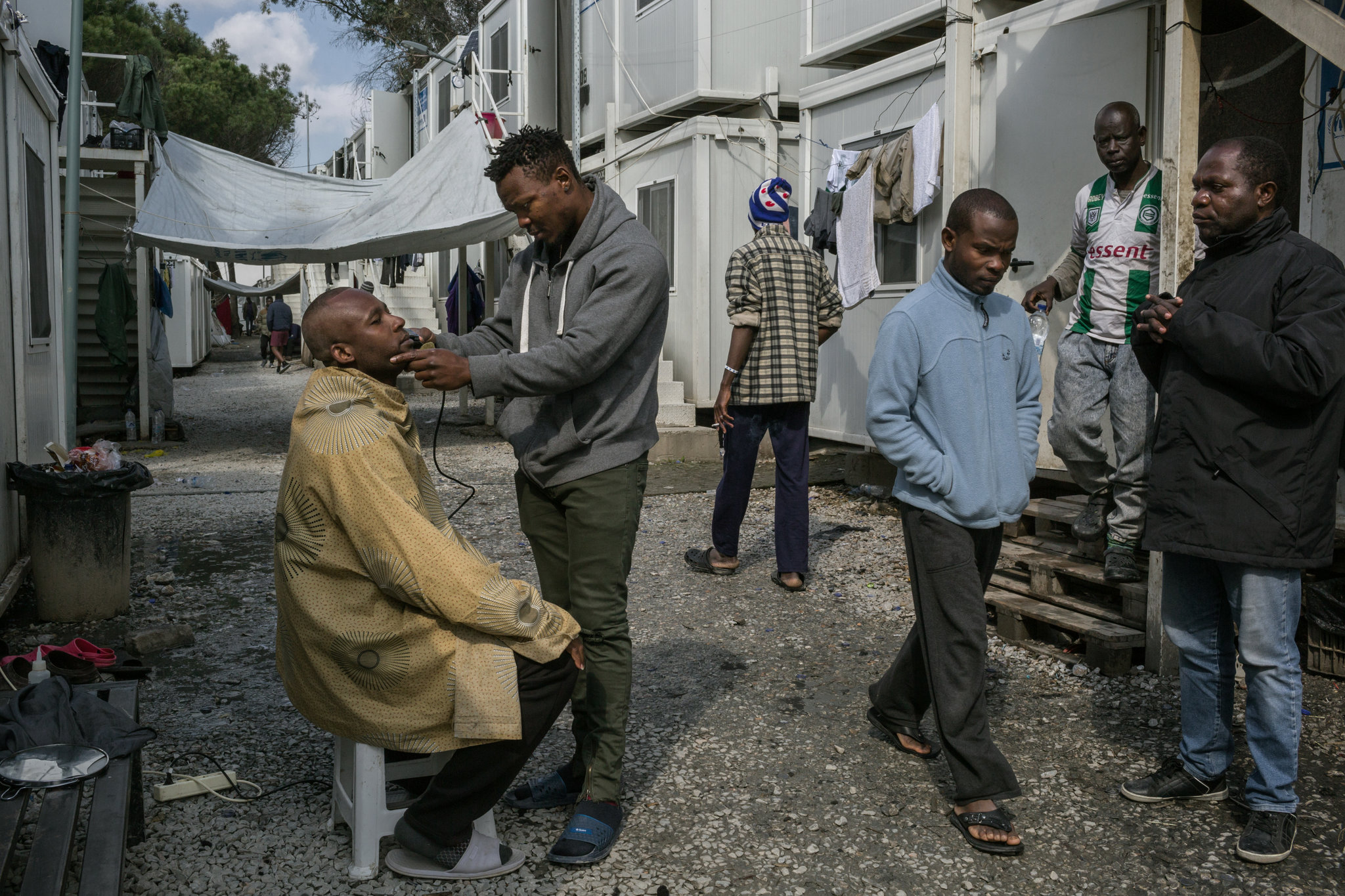 Desmond Obiajunwa, 34, from Nigeria, got a shave from Clement Tagni, 28, from Cameroon. Both had been on Lesbos more than three months. Waiting for his turn was Langana Rene, 36, far right, from the Democratic Republic of Congo; he came to Lesbos more than a year ago. CreditMauricio Lima for The New York Times 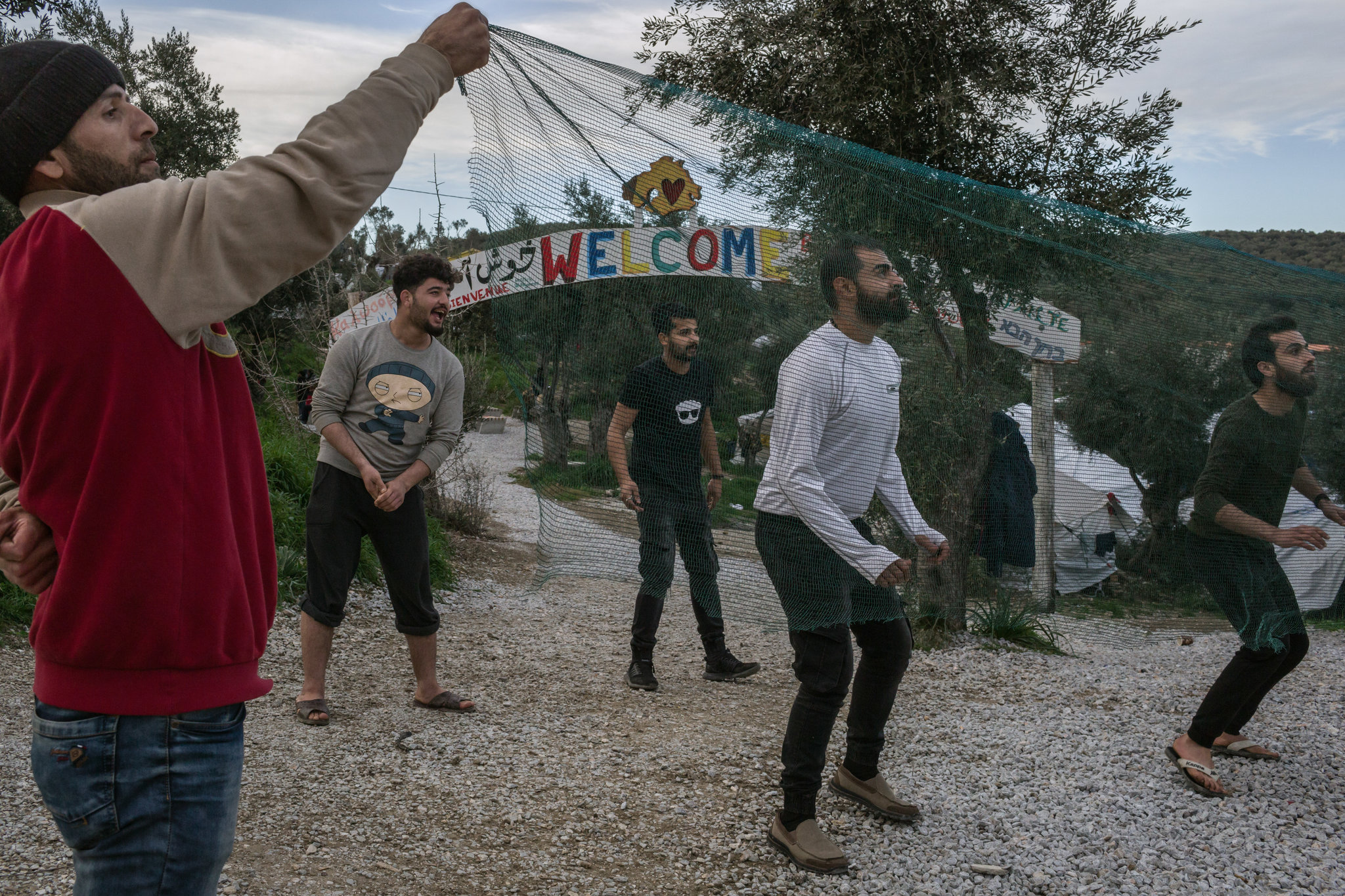 Iraqis and Syrians playing volleyball outside their tents in the makeshift camp. CreditMauricio Lima for The New York Times

Some have lost hope their applications will be accepted and are desperate to get out.

A 20-year-old Algerian, who would give his name only as Anas for fear of running afoul of the authorities, said he had tried to smuggle himself off the island multiple times in trucks being loaded on ships for Athens. Each time, he was discovered by military officers.

He knows the chances of his asylum application being accepted are slim.

“We from Algeria, Morocco, Tunisia, can’t go,” he said. But he keeps on trying.

“Every day I’m here,” he said. “Sometimes I try, sometimes not. It’s hard to leave.”

In the international pecking order for asylum, Syrians, Iraqis and sometimes Afghans stand a better chance because their countries are actively at war. Still, not everyone makes it, separating friends. 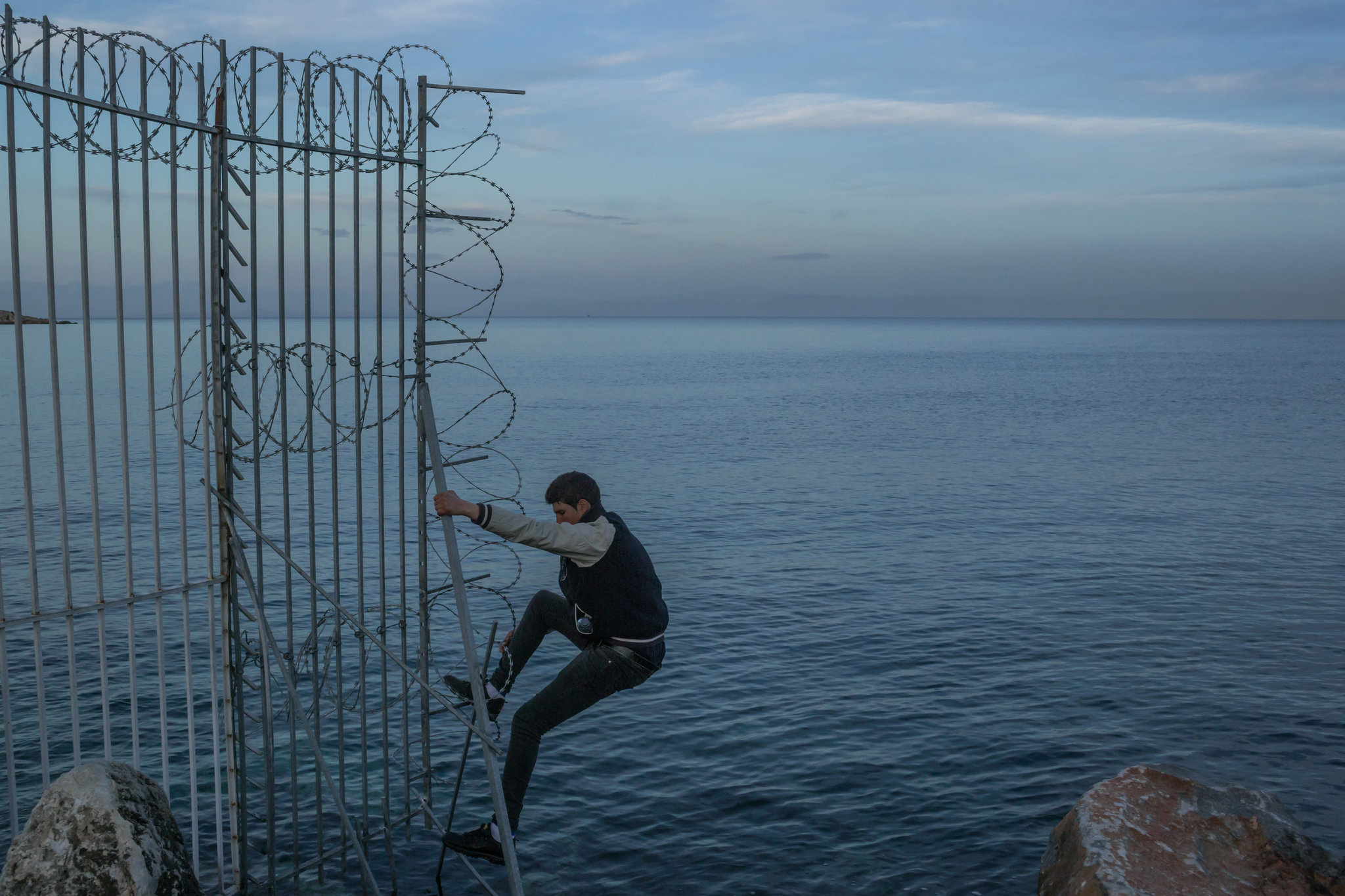 Anas, a migrant from Algeria, scaling a fence around the port at Mytilene, while trying to smuggle himself on a ship to Athens. CreditMauricio Lima for The New York Times 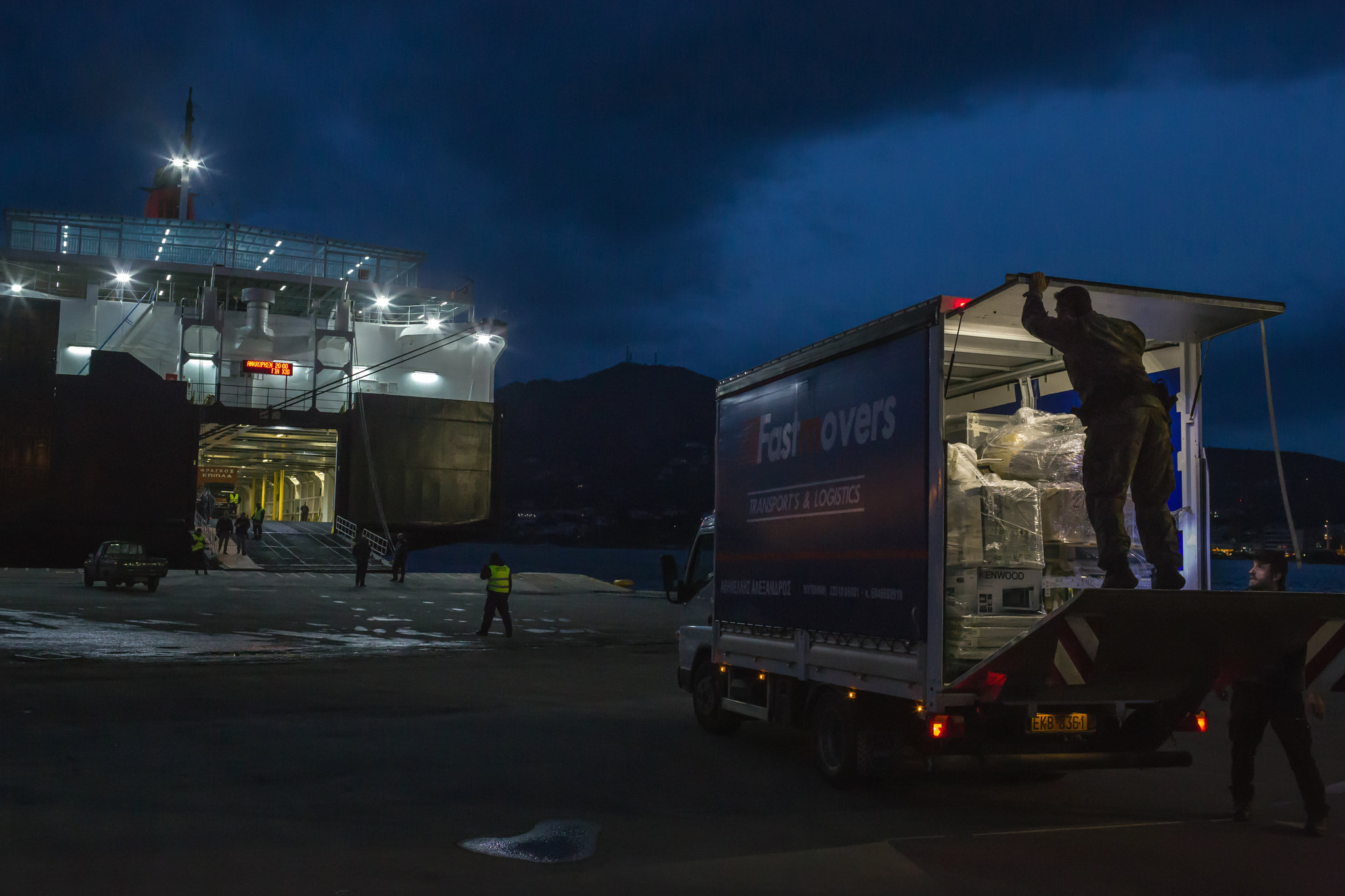 A Greek military officer at the port of Mytilene searched for migrants before a truck was loaded onto a ship bound for Athens. CreditMauricio Lima for The New York Times

For the women in Moria camp, the situation is often worse.

A 30-year-old woman from Afghanistan, who asked that her name not be published out of fear of being hunted down by her former spouse, described how she fled Afghanistan a year and a half ago, when her husband of 13 years tried to kill her.

In Turkey, she said she was sold to a smuggler, who imprisoned her in a room with no light, gave her no food and raped her for a week.

When she eventually arrived in Moria, things got worse. “I wanted to kill myself when I saw the situation,” she said. 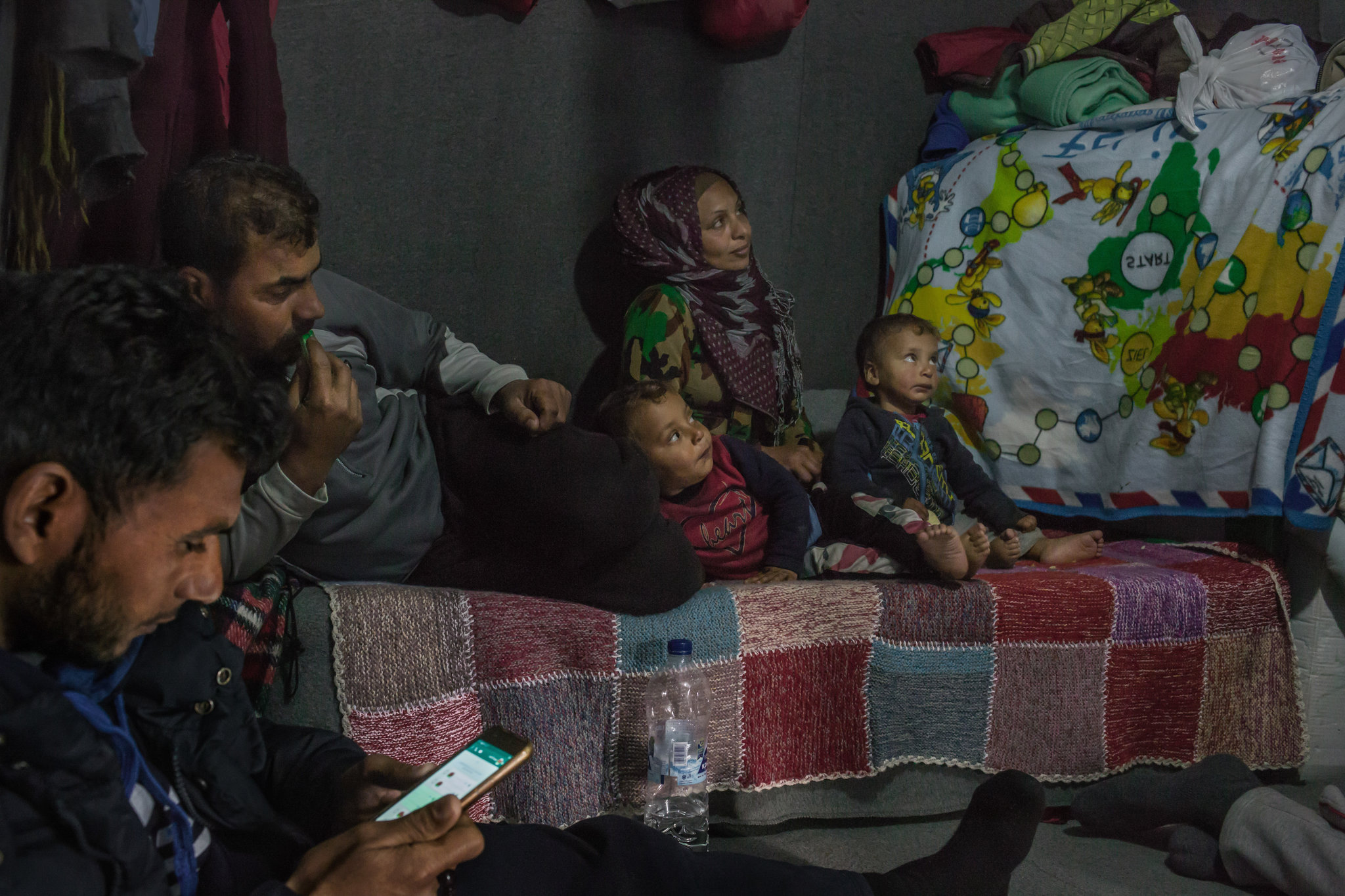 A Syrian family inside a tent outside Moria. The 2-year-old twins, Azam, center, and Rassul, watched cartoons next to their mother, Ratiba Subhi, 33, and father, Akram Hamid, 35. They were joined by a friend, Aref Ahwal, 34. CreditMauricio Lima for The New York Times 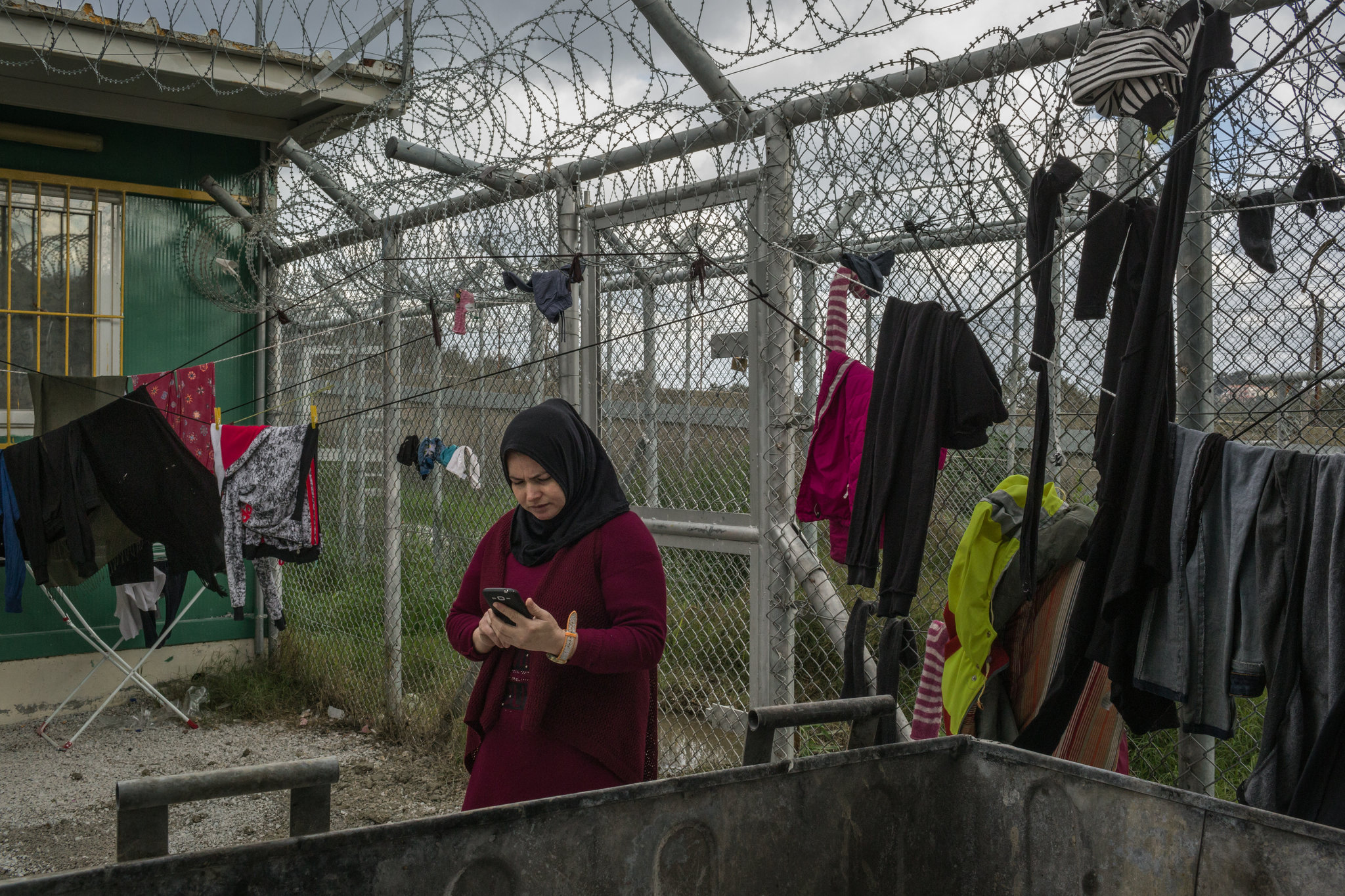 Women face special dangers inside Moria and other camps on the island. CreditMauricio Lima for The New York Times

At first, there was no place for her in the overcrowded sections that separate single women from men, and she was forced to sleep in a tent with both men and women.

One night, she lost her way in the dark and found herself in the woods of Moria. A man grabbed her from behind and raped her.

She went to the police, but after she filed her complaint, they sent her back to Moria. “I wanted to kill myself,” she said.

Giannis Mpalpakakis, the director of the Moria camp, which is run by the Greek state but largely financed by the European Union, acknowledged the challenges that he and his team are facing and insisted that they were doing their best, given the extreme circumstances.

“We are trying really hard to help these people; we are not indifferent,” he said.

“Overcrowding is a huge issue for us,” he acknowledged. “Moria is the most overcrowded place in the world, if you divide the number of people living here by the square meter.”

Yet the numbers arriving are expected to rise again as the weather warms. The slow processing of cases reduces the population at the camps, while the trickle of new arrivals replenishes it.

Graves on the island, old and new, betray the dangers of the sea crossing. Boats have capsized and run aground. Rescuers patrol the coasts even now.

“We need to increase the flow of migrants from Greece to Turkey, and decrease the flow from Turkey to Greece,” said Miltos Oikonomidis, a European Union policy officer.

An additional 2,365 were moved to Athens, while 147 left Lesbos voluntarily. There are currently more than 7,800 refugees across all of Lesbos. 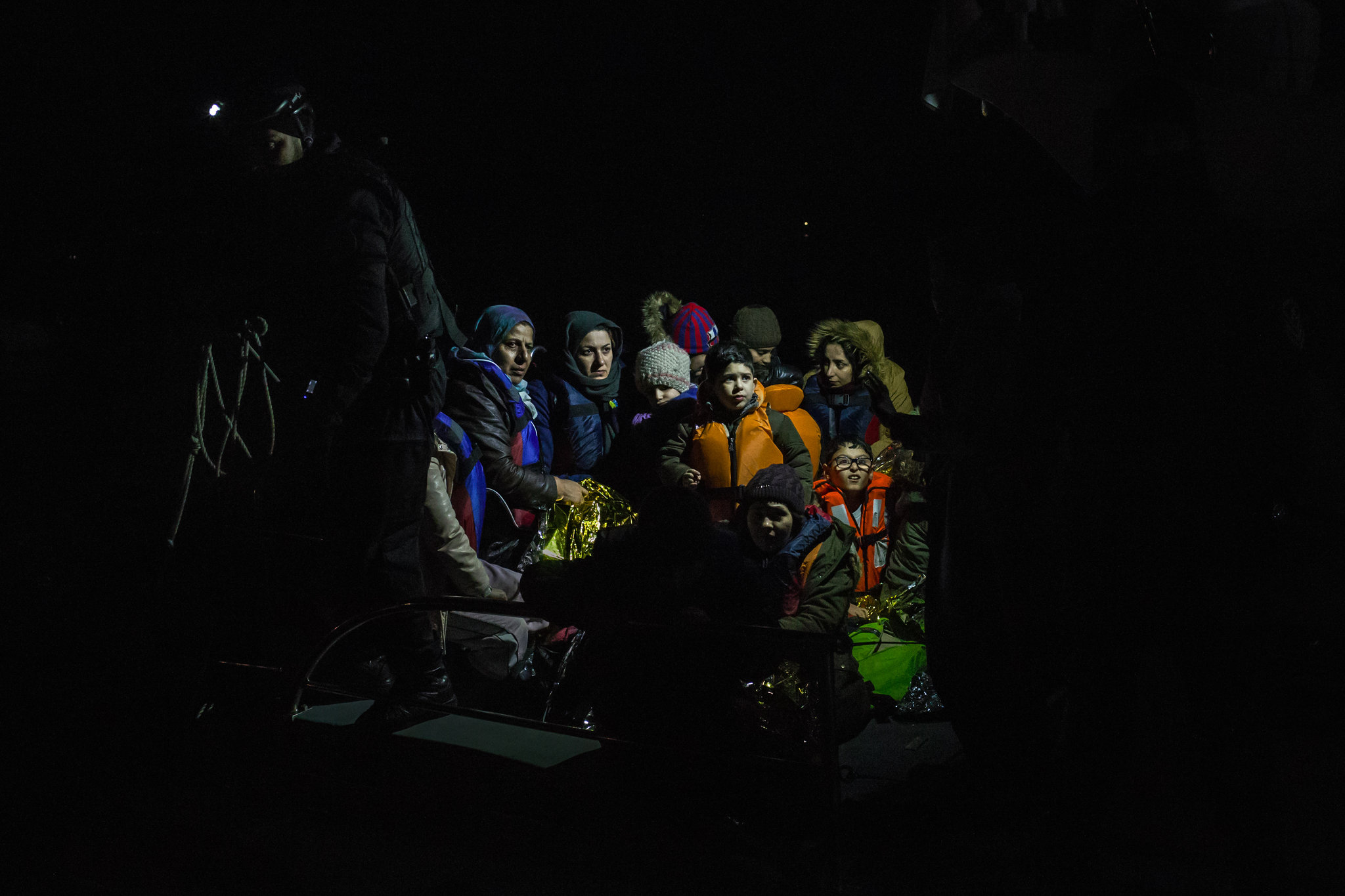 Migrants at Skala Sikaminias after their dinghy was intercepted. Though the numbers crossing the Aegean Sea are down, thousands are still arriving. CreditMauricio Lima for The New York Times 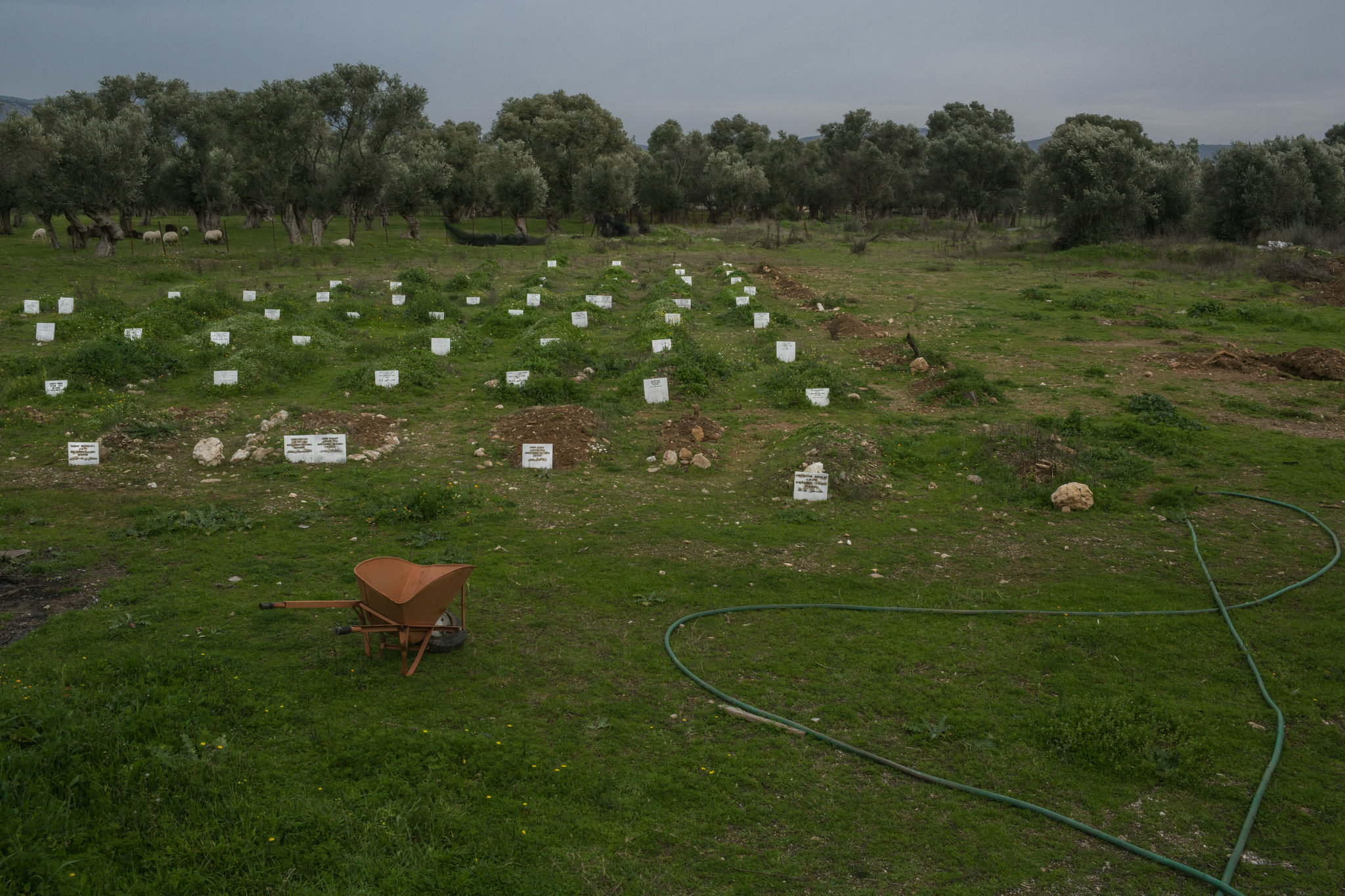 A cemetery near the village of Kato Tritos with the graves of some who died while attempting the crossing from Turkey. Many are unmarked or unidentified.CreditMauricio Lima for The New York Times

“No matter the efforts that are underway in Moria, the point is to reduce the influx of refugees,” Mr. Oikonomidis said.

But that will remain difficult to do. Some are not just fleeing war; they’re seeking opportunity, freedom.

“You’re thinking about the future,” said Isaac Hielo, a 29-year-old from Eritrea, who said his family had died of AIDS.

Does he have hope?

“Yes,” he said with a smile. “Tomorrow is another day, yes?” 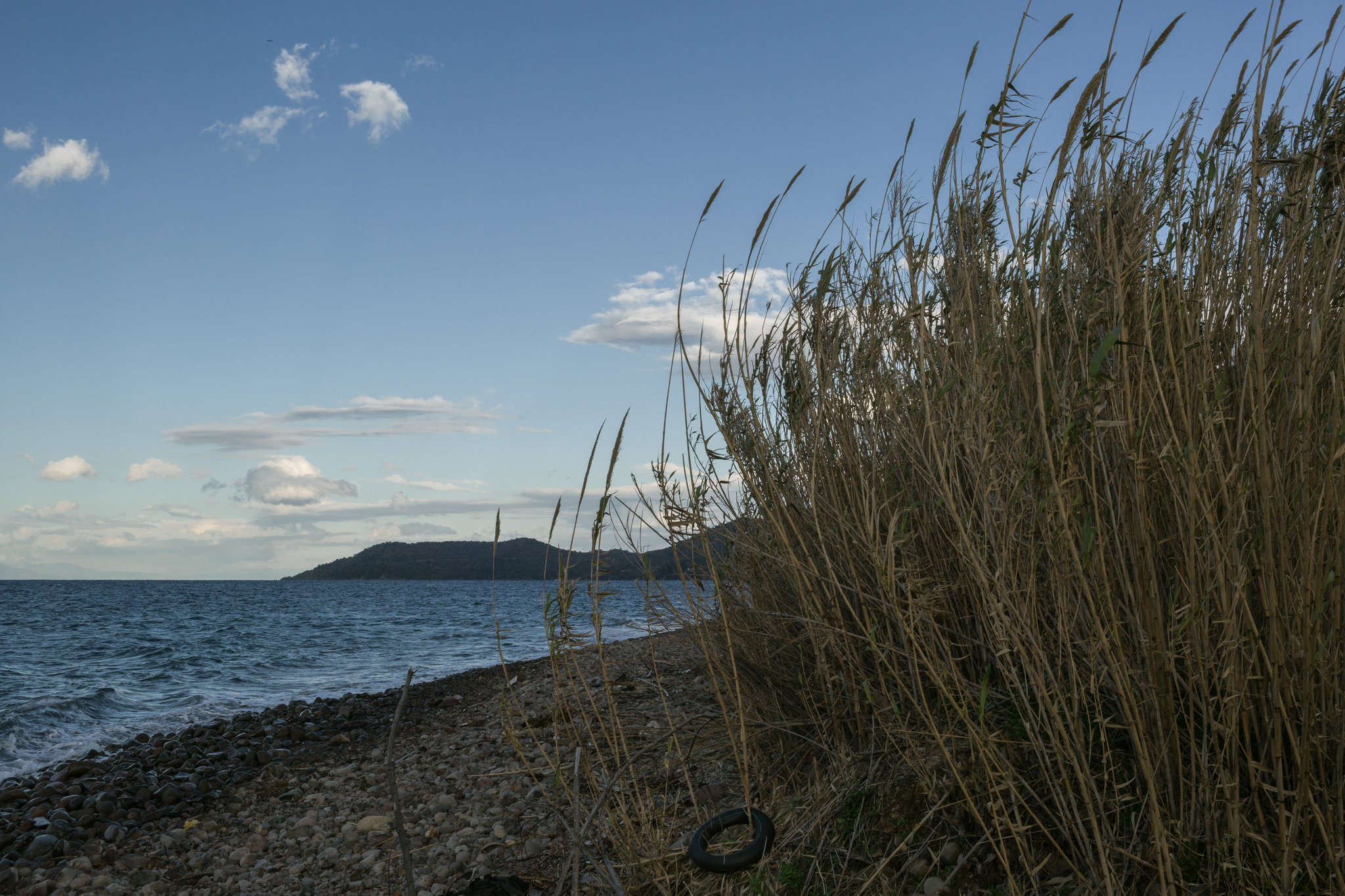 An inner tube on the beach near the village of Skala Sikaminias, one of the many telltale signs of the migration that has brought thousands to Lesbos since 2015. CreditMauricio Lima for The New York Times