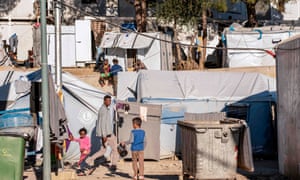 Children being bitten by scorpions, rats and snakes; hundreds being forced to use a single shower; the stench of human excrement never far away; and food shortages becoming the norm. One by one, Sophie McCann lists the degradations of life for refugees detained on Lesbos, the Greek island on the frontline of a new surge of asylum seekers desperate to reach Europe.

McCann, a British advocacy manager with Médecins Sans Frontières, like other aid workers, is now raising the alarm: at least 24,000 men, women and children trapped in vastly overcrowded Aegean island camps are being subjected to conditions so harrowing they bear all the hallmarks of humanitarian catastrophe. Four years after the greatest migration crisis in modern times, there are fears history is repeating itself.

“The level of human suffering is just indescribable,” says McCann, adding that incidents of self-harm, even among toddlers, have risen sharply. “I struggle to find the right words because none can convey the sheer misery and inhumanity of a situation that in Europe is frankly unbelievable.”