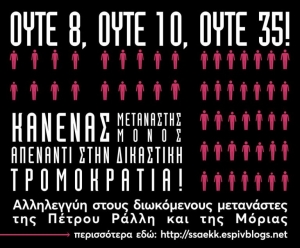 Tomorrow, 11 May 2018, the trial will be held for ten asylum seekers who have been charged with arson and other lesser crimes, related to riots that took place in Moria Camp on 10 July 2017 in Lesvos.

Similar to the case of the Moria 35, we believe this prosecution is part of an ongoing policy to criminalize and silence those who question their hostile containment in Moria and on Lesvos island.

The Legal Centre has been closely following this case, as we witnessed the events on 10 July, and worked together with one of the defendants to advocate for the rights of asylum seekers in Lesvos in the months prior to his arrest. We will be monitoring the trial, in addition to appearing as a witness for the defense. Further information, from the Solidarity Assembly for the Moria 35 is copied below.

Originally published by the Solidarity Assembly for the Moria 35

The industry of criminalization of immigrant lives continues as just a few weeks after the trial of the #freethemoria35 another trial takes place in Chios. This time 10 people are accused for events that took place on the 10 of July of 2017, just a week before the riots that lead to the prosecution of the #Moria35.

The events that have put this “industry” in action were part of a series of protests by immigrants demanding freedom of movement from Lesvos to mainland Greece, and against the conditions in Moria camp and unfair asylum procedure. On 10 July 2017, a protest erupted in Moria Camp. The demonstration was a response to the rejection of asylum claims and systematic detention of asylum seekers in Lesvos. The police in Moria responded by attacking the crowd with tear gas. There were no serious injuries, but the containers of several NGOs were targeted, including Euro Relief, a religious Christian organization responsible for providing basic services in the Camp. EuroRelief has been denounced for collusion with the police, discrimination against and failure to protect LGBTQ+ immigrants, and for prosthelatysing inhabitants of Moria Camp.

It is this resistance to the repression against immigrant lives that triggered the prosecutions in this case.

The arrests in the case took place weeks after the events, and were not random as in the case of the #moria35. Among the prosecuted is a well known immigrant who has been organizing and assisting people to claim their rights for over a year. Mohamadou, who has received asylum, did not remain a passive observer of the situation and the treatment which he and other people were receiving.  Instead he tried to change things and empower his fellow immigrants. As one of the representatives for the Mali community, he attended meetings, discussed with people in the camp responsible for conditions and the asylum procedure, and organized along with other actors. It seems like that he is being punished for this role in organizing the migrants community and raising awareness of the dehumanizing treatment immigrants receive when they reach Lesvos.

The message behind this specific prosecution is that all the parts of the machine of Moria are essential for its function and continuity, and that none shall be contested  (resistance will be tolerated). Nor the place of the immigrants which is to passively accept what has been planned for them nor the role of the NGO’s which is encircled inside this detention – centered system.  And in order to ensure that, the responsible of the camp, the police, the prosecutors, try to make sure that every effort of the immigrants to organize and protest against any part of this machine, will be crushed.

We have witness this kind of counterinsurgency politics before, as state repression has been a tool against our struggles in everyday life. Confronting these series of prosecutions we are going to stand in solidarity with the people that face the encriminilization of their lives and make sure that they don’t stand alone against this machine that is called European migration Policy.