Making drama out of the refugee crisis 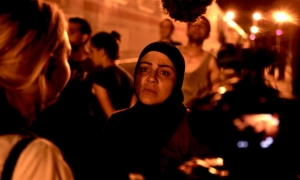 Films about Europe’s migrant crisis run the risk of being artful and exploitative. Now directors are seeking to redress the balance.

The release in cinemas next month of young British film-maker Orban Wallace’s Another News Story provides an opportunity to reflect on how documentaries have covered the European migrant crisis since it came to widespread attention in 2015. Wallace’s brilliant film turns the camera on the news crews and film-makers who have spent the past three years waiting on harbours, cliffs and train tracks to get the most dramatic footage of thousands of desperate people trying to reach and cross Europe. This is important not as an intellectual exercise but because it questions complacency in film-makers and audiences who have seen a lot of these images.

Another News Story questions the aestheticising of the crisis, whereby film-makers create beautifully framed images of mass movements of unidentified people running across borders without any apparent empathy for those making these desperate journeys, or any examination of the ethics involved. Film crews are shown asking refugees to say the same things over and over, then moving on to the next story. Their intentions may be honourable, but the scrum to get the most emotional pictures feels unpleasant and desensitising.

When the refugee crisis started making headlines, some excellent documentaries were made, with real shock power. Gianfranco Rosi’s Oscar-nominated Fire at Sea (2016) was a portrait of Lampedusa, the tiny Sicilian island where migrants from Africa and the Middle East were arriving in their thousands in search of a new life in Europe. Fire at Sea worked as both a detailed account of the horrors of the journey, and also of the impact on the lives of the Italian islanders. It’s art, with grit and authenticity. Rosi spent more than a year on Lampedusa – long enough to document with dignity the anger and exhaustion of everyone involved.

Daphne Matziaraki’s short film 4.1 Miles (2016) is more raw still, its 21 minutes dedicated entirely to one day’s rescue by coastguards on the Greek island of Lesbos of an incoming boat of refugees. To be so close to the terror of the new arrivals provoked real anguish.

Since then, too many films on the subject have felt exploitative or simply outdated. Ai Weiwei’s Human Flow last year was praised by some critics, but I felt it flattened all global refugee experiences into one tragic narrative. You didn’t hear meaningfully from a single refugee: the priority was to film them as artfully as possible. Ai’s tendency to place himself and his work in set-piece scenes felt inappropriate, and he avoided analysis. Human Flow positioned itself as being an important news report, but the news has been doing the job of reporting for three years, and staying more up to date than a documentary, with its long lead time, ever could. 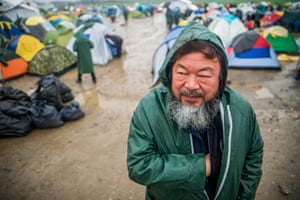 Fortunately, as in Another News Story, some film-makers are beginning to employ new strategies to analyse the refugee crisis, question their own complacency and ask what it means to be an observer. Guido Hendrikx’s Stranger in Paradise, which has been touring international film festivals, (2016) is a semi-staged provocation about how refugees are prepared for life in Europe, and how Europeans talk to and about them. Hendrikx casts an actor to play a Dutch guide, presenting a group of real refugees with three scenarios of how Europe will treat them: first, with an aggressive anti-immigration attitude; then a liberal, welcoming response; finally, a more realistic, bureaucratic one. This approach succeeds by giving refugees a platform to air their own opinions rather than being merely objects of pity.

In a wonderful coda, while packing up, the film crew are asked by a group of refugees how this oh-so-clever documentary will help them. The answer is probably not very much, which seems refreshingly honest.

A different strategy is taken by the Australian film-maker Gabrielle Brady in Island of the Hungry Ghosts (2018), about a trauma counsellor working in a high-security detention centre for asylum seekers on the remote Christmas Island. Brady’s documentary goes deep into the psychology of being on the move and away from home. The therapist, Poh-Lin, is herself traumatised by the experience of helping refugees and listening to their stories of suffering caused by the indifference of the centre’s management.

Island of the Hungry Ghosts also manages to be visually beautiful without poeticising the refugee experience. Vivid shots of a detention centre in the jungle surrounded by migrating red crabs suggest a terrifying, primal experience straight out of a Terence Malick film. A version was released on the Guardian site last year.

Documentaries can provoke viewers and have relevance to Europe’s debate over refugees. However, if they don’t provide space to understand refugees’ experiences of being watched by us, they become just another news story.