The idea of retiring on a Greek island conjures images of white sandy beaches, calm blue waters and easy living.

But for a group of educators from the Bay Area, retirement on the Mediterranean isn't exactly what you'd expect.

Former San Francisco State mathematics professor Cecelia Wambach first decided to change up her Golden Years two years ago and has been fishing for others to join her ever since. Her story began as she watched the refugee crisis unfold on the Greek island of Lesbos from her television set in the East Bay community of Rossmoor.

Lesbos is near Turkey and has been hard hit by waves of rafts overflowing with mostly Syrian refugees seeking asylum in Europe.

"When I saw it, I said to myself I need to go there," she said. "Lots of people go on cruises or they travel — I wanted to do retirement differently."

So, she picked up the phone and called her longtime Greek-American friend Barbara Karvelis from Redwood City. Also a retired Bay Area educator, Karvelis wanted to help as well but her husband feared for her safety traveling to Greece during such a chaotic time.

"He said there are riots — you can't go or you're are going to be killed," Karvelis said. "But I thought about it and decided I really wanted to do this, and I didn't want Cecelia to go alone."

Wambach and Karvelis convinced three other likeminded educators to join them on their first self-funded trip to Lesbos in September 2016, where they gained access to refugee camps on the island by donating 50 loaves of bread and offering to cook.

From there the group connected with the non-profit Save the Children and began leveraging their education backgrounds to help unaccompanied minors in the camps.

"The kids were actually sitting down on dirt reading and learning grammar," Karvelis said. "We weren't really set up. We just went over there to see if we could help and it evolved."

Since then, the volunteers have assisted the Greek instructors in finding engaging classroom activities to teach science, math, technology and language to the children. In one exercise, Karvelis said volunteers used the cut-out Styrofoam from discarded lifejackets on the beach to create props for a math lesson.

But most of all, the volunteers just want to keep the children positive about their futures.

"They all have PTSD. Many of them have seen their parents killed in front of them," Wambach said. "The stories are heartbreaking and the kids are magnificent."

The Moria refugee camp was built to hold fewer than 2,000 refugees but now holds more than 6,000, Karvelis said. People live in tents and small metal units, and about 500 unaccompanied minors live in the camp, 150 of whom attend two schools where the women volunteer.

"The kids from Syria and Afghanistan are go-getters," Wambach said. "They are grateful for every little thing they get. They are not spoiled. They don't have everything they want and need."

After the group of educators returned to the US, one of the first places they went for support was San Francisco's Greek community, where Wambach delivered an impassioned speech at the Annunciation Cathedral on Valencia Street, spurring the church's longtime priest, Father Stephen Kiracou, into supporting their efforts.

"My hope is that we will partner with these people and help them along," Kiracou said. "While we can't save the world, each of us can do one thing in our own way to help a child, and there is nothing more worthy in my opinion than helping children."

Kiracou's family was originally from northern Cyprus but were forced off their land when it was annexed by Turkey in 1974, a life-changing event he says has made him empathetic to the plight of refugee children.

"Most of my family there are refugees — they lost everything," he said. "This intensifies my desired to help children who have been deprived of their lives and their homeland."

Kiracou said he mentioned the project to the consul general of Greece, who was somewhat guarded about the issue, arguing that well-meaning people often come from all over but can sometimes interfere with official Greek efforts. Wambach said she has heard similar criticisms in the US.

"People say: 'There's so much need here — why do you go there?' I feel that in this country we are equipped to volunteer. But it's not the same in Greece," she said. "They are in a horrible financial crisis themselves. If they work, they need to get paid."

And as such, the Bay Area volunteers have pledged themselves to helping, not stepping on toes. Instead of trying to dictate terms of classroom dynamics, Karvelis and Wambach said their efforts are focused on providing support for the overwhelmed Greek teachers, many who haven't been paid in months. This includes pedagogical techniques in dealing with a complex student body who speak neither Greek nor adequate English.

"We've all taught in SF so we know how to work with multi-lingual and multi-cultural classrooms," Wambach said.

Wambach said she recently completed her paperwork for a nonprofit organization, REAL International (Refugee Education and Learning), which recruits volunteer educators to help teach the refugee children in Lesbos. REAL now has more than 60 volunteers from around the world on its roster, including about a dozen East Bay residents, who travel to Lesbos at different times of the year, paying their own way.

Wambach said she raised about $10,000 at a Rossmoor fundraiser in late May and said the group's next goal is setting up early childhood centers for mothers and their children. Meanwhile, Karvelis has set up a GoFundMe account in an effort to raise money for books and educational supplies.

REAL is making another trip to Lesbos this summer with more retired Bay Area volunteers now joining the effort and looking to reshape their retirement.

"It's amazing the amount of people who want to help," Karvelis said. "For us, the cruise ship is not the end of the line." 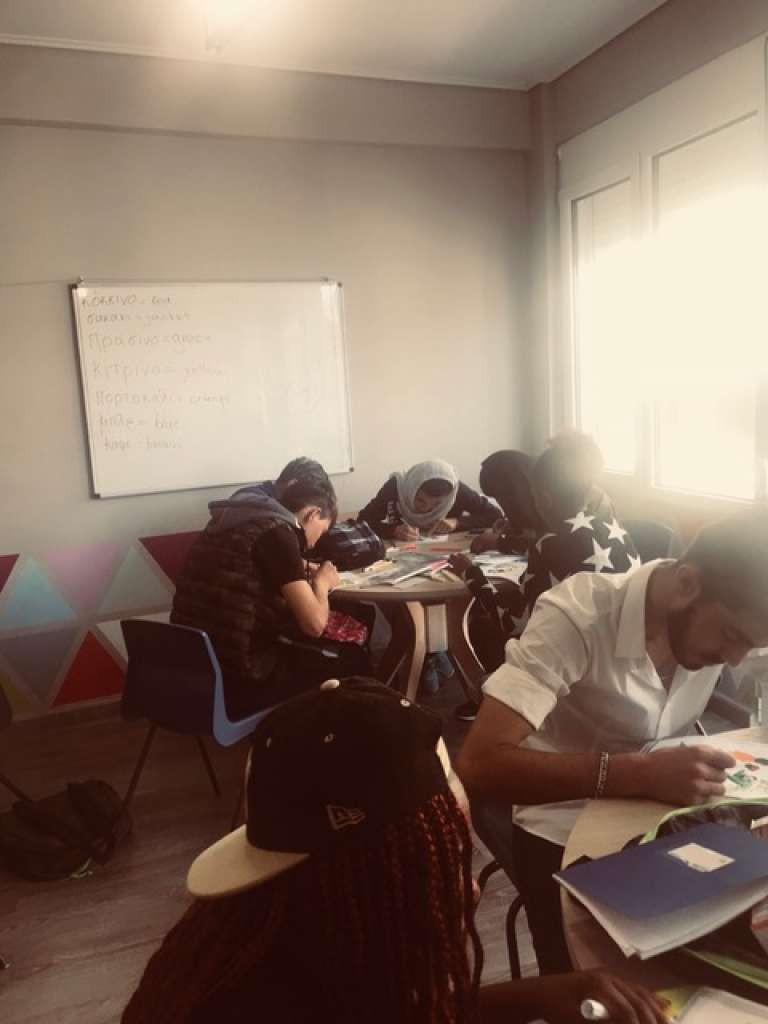 Refugee children work on assignments inside of a makeshift classroom on the Greek island of Lesbos. A group of retired Bay Area educators has set up a non-profit providing educational support to refugee children in Greece. 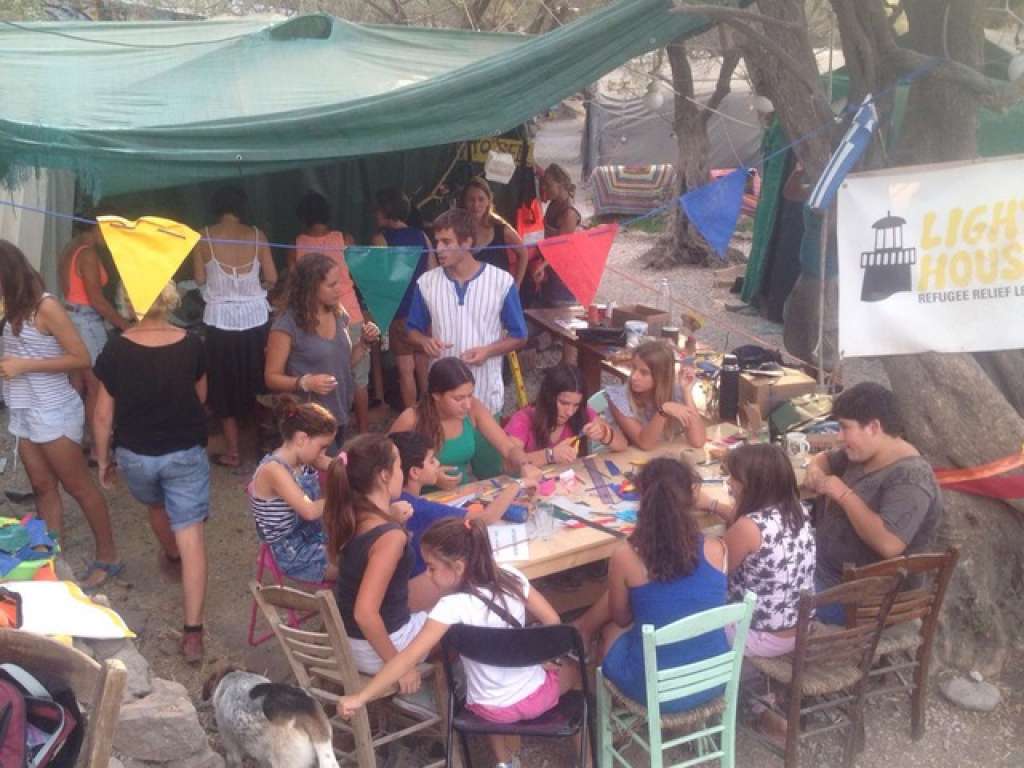 Greek educators teaching refugee children on the island of Lesbos have a tough task in terms of language barriers, PTSD issues and a lack of resources. A group of retired Bay Area educators has set up a non-profit providing educational support to refugee children in Greece. 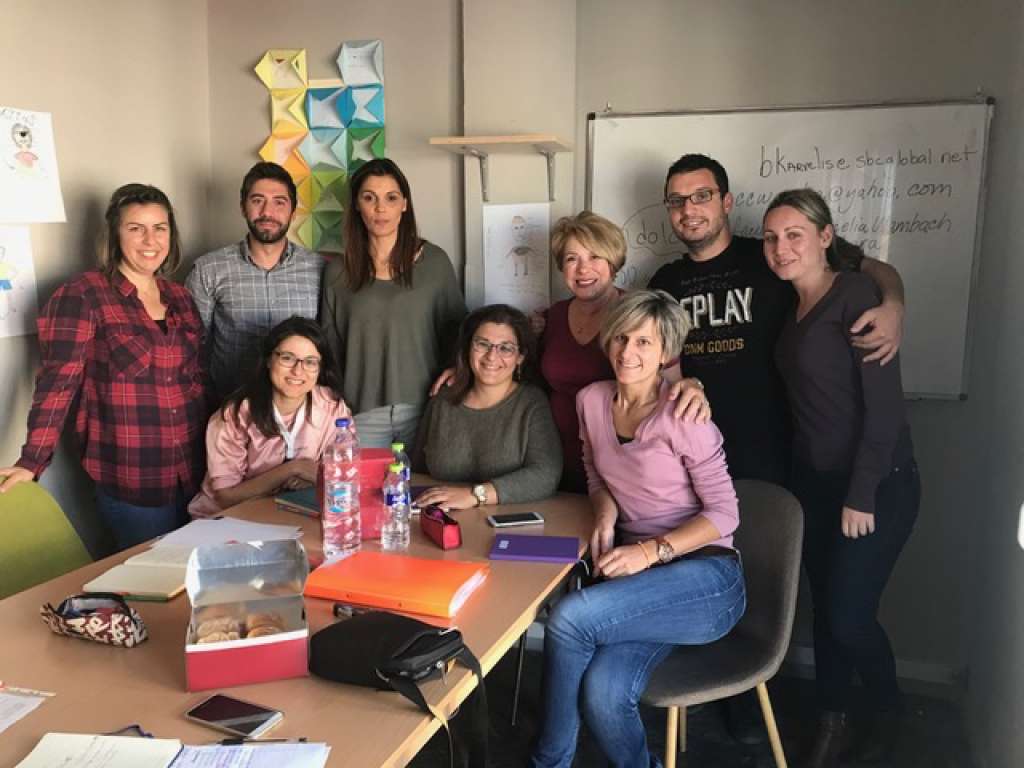 Greek educators teaching refugee children on the island of Lesbos have a tough task in terms of language barriers, PTSD issues amongst students and a lack of educational resources. A group of retired Bay Area educators have been providing educational support to since late 2016 by assisting the Greek teachers with classroom management techniques, educational supplies and bringing in new volunteers. 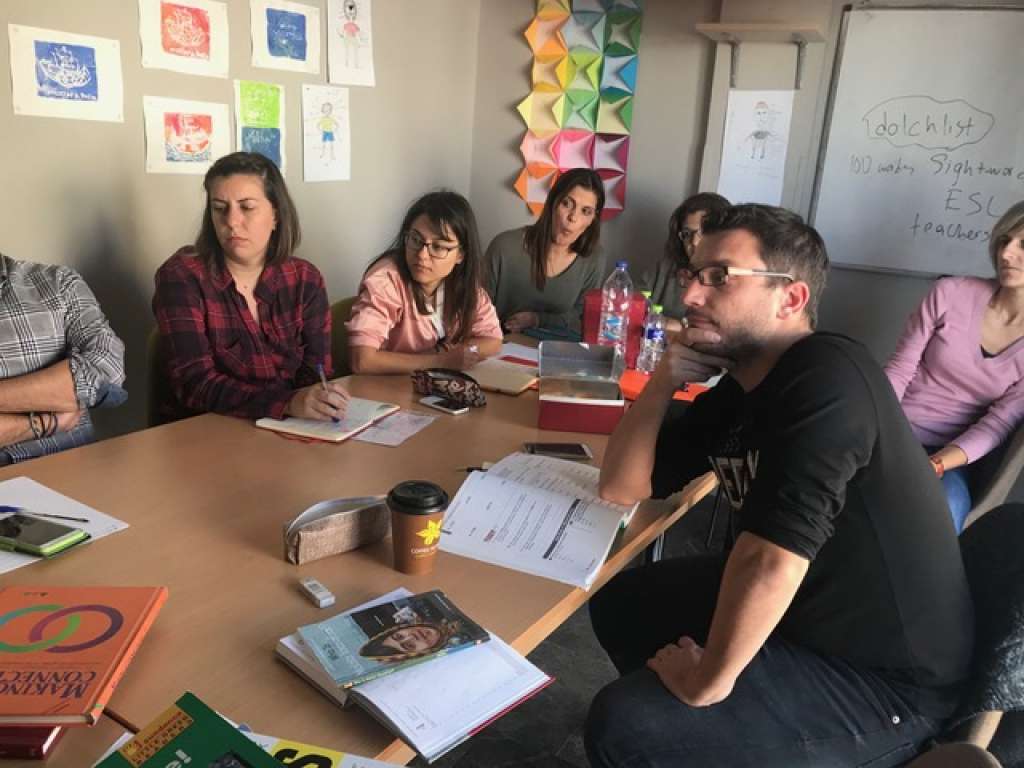 Greek educators teaching refugee children on the island of Lesbos. Many local teachers working at refugee camps in Greece have gone months without pay despite grueling classroom conditions. In response, a group of retired Bay Area educators has been providing educational support to since late 2016 by assisting the Greek teachers with classroom management techniques, educational supplies and bringing in new volunteers.