* The event will be held in Greek with simultaneous interpretation in English and it will be streamed online from the You Tube Chanel of the University of the Aegean at: https://youtu.be/gjDpz1sxKoc

* Update: Watch the Video of the event at the bottom of the page

The Refugee Issue, an intellectual and political challenge
Presentation of the Observatory of the Refugee and Migration Crisis in the Aegean

The massive influx of refugees and migrants into the Aegean islands, which reached its peak in the summer of 2015 and continues in lower intensity until today, is an event of global importance that requires systematic recording and study. The Observatory of the Refugee and Migration Crisis in the Aegean is a response to the intellectual and political challenges posed by the refugee and immigration issue. Founded by Greek and foreign social scientists, under the Faculty of Social Sciences of the University of the Aegean, the Observatory is a tool for the systematic monitoring, documenting, and comprehension of the multifaceted phenomena of immigration and displaement in the wider region of the Aegean archipelago.

The Observatory is a project of the Aegean University and is being implemented with the support of the Greek National Documentation Centre, the Wenner Gren Foundation for Anthropological Fieldwork, and the Global Studies Centre at the University of Pittsburgh, U.S.A. It is based in the Department of Social Anthropology and History in Mytilene.

The objectives of the Observatory are two. On the one hand, it aims to collect, categorize and document a variety of materials relevant to the Refugee and Migration crisis in the Aegean, focusing on the period 2015-2016. For this purpose a Digital Repository has been created, in cooperation with the National Documentation Centre. The digital presentation of primary and secondary materials in an open access website for interested individuals such as researchers and journalists, as well as collectives and authorities, is of particular importance not just for the promotion of relevant research, but also for preserving the historical record of the phenomenon and its multiple social, economic and political dimensions.

Additionally, the Observatory, through the operation of its Webpage, aims to track the phenomenon as it unfolds in the Aegean region today. On the webpage of the Observatory we attempt to collect and present the available materials, from primary and secondary sources, focused on the management of the refugee and migration phenomenon in the Aegean: these include populations on the move, who reside on the islands of the Aegean; the facilities devoted to the reception, identification, accommodation and detention of these people; the various organizations, institutions, and Greek and European authorities, as well as individual and collective agents, which comprise the landcape of Humanitarian Governance in the Aegean; and of course, the local communities that are affected in various ways by the fluctuations of refugee and migrant phenomena on the European Union’s borders.

Lastly, the Observatory, being in principle a scientific endeavor, attributes particular importance to the support and promotion of social research conducted in the Aegean from both Greek and foreign institutions. For this reason, the page aims to be a space for the support and empowerment of research and scientific dialogue, attempting at the same time to explore ways for their promotion beyond academia.

The Observatory of the Refugee and Migration Crisis in the Aegean is organizing an opening event entitled: THE REFUGEE ISSUE, AN INTELLECTUAL AND POLITICAL CHALLENGE. At the event, the Observatory, its Webpage and Digital Repository will be presented, followed by a discussion on the Observatory’s mission with the participation of citizens who, from various perspectives, have direct experience with the refugee issue on the Aegean islands. The event will take place at the Auditorium of the Geography building at the Campus of the University of the Aegean in Mytilene on Tuesday, November 28, 2017, at 18:00-21:30.

Prof. Stefanos Gritzalis Rector of the University of the Aegean

Prof. Sotiris Chtouris Dean of the School of Social Sciences, University of the Aegean

Coordination: Effie Plexoussaki (Assistant Professor at the Department of Social Anthropology and History, University of the Aegean)

Evthymios Papataxiarchis (Professor at the Department of Social Anthropology and History, University of the Aegean) “The Refugee Issue: The Observatory facing an intellectual challenge”

Katerina Rozakou (Postdoctoral Researcher at the University of Amsterdam) “The Refugee Issue: The research field and its problems”

Coordination: Nikolaos Nagopoulos (Professor at the Department of Sociology, University of the Aegean) 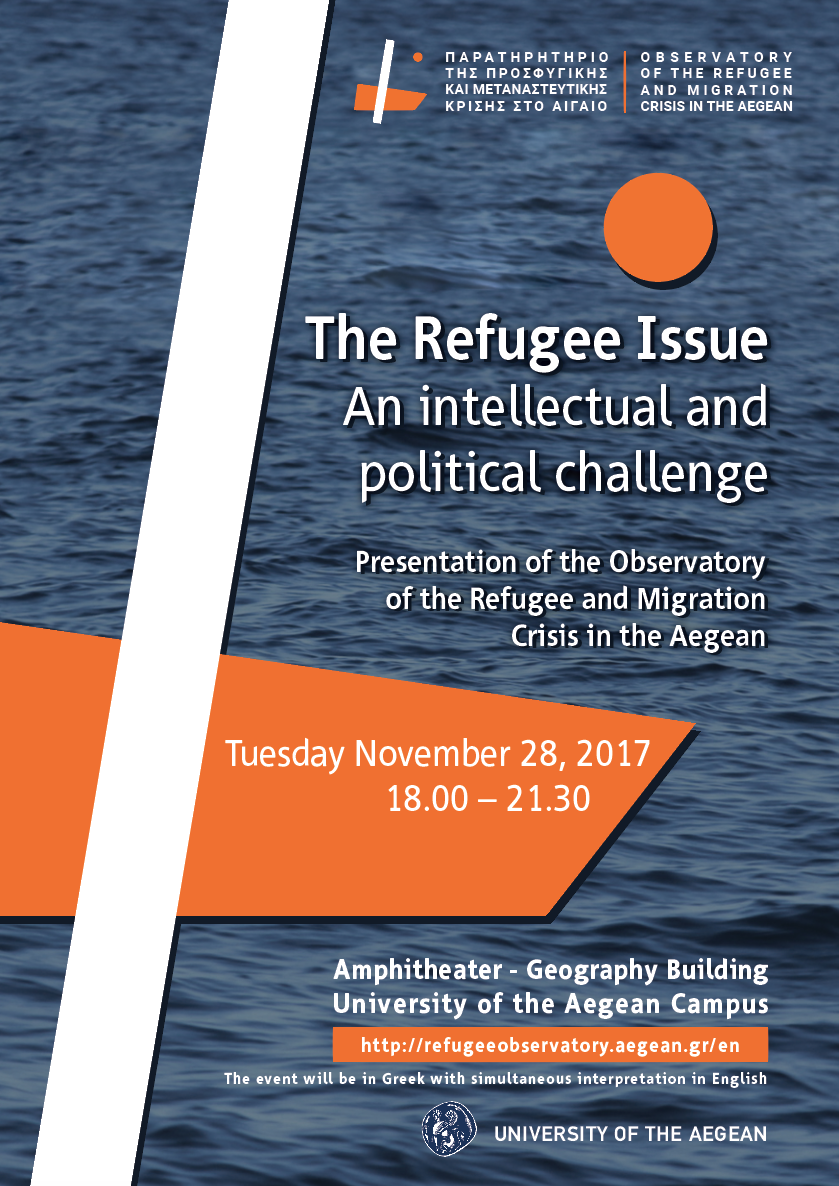