Timeline of the Protest in Sapfo square:

The protest began on Sunday 22nd of October, when around one to two hundred people, men, women and children mainly from Afghanistan, after a night of protest outside Moria RIC, they marched to the city of Mytilene and after some more protesters from Iran joined, all together started an occupation of the central Sapfo square. They would had marched to the square from the previous day if police had not stopped them outside the camp. The protesters, all of them asylum seekers, were demanding better accommodation and security, because of the bad conditions of living in Moria camp and the fights which have often been erupting between people from different communities within the camp.

On Lesvos, the situation escalated even more and riots erupted in Moria, resulting in the evacuation of NGO personnel. It was a tense night in Moria and there are reports of people gathering around EASO offices and fights between Syrians and Afghans during the night.

This morning, unfortunately, an Iraqi man was reported dead after having a heart attack but this has not been confirmed as being related to the riots. There are, however, reports of many others being injured during the day. This situation has dragged on for too long on the island and the new surge of arrivals this summer has only made it worse. Despite the government’s efforts to relieve the pressure there by transferring some people to the mainland, the level of arrivals is still making the numbers rise and the conditions can only deteriorate. Reportedly, the asylum services haven’t been working on the site for days and the announced decongestion of the island is taking too long. At the moment there are thousands of refugees waiting for the blue stamp that allows them to travel on to Athens.

There are hundreds of refugees, including women and children, in the fields around Moria. According to official data, 5,500 refugees and immigrants are staying in the camp while the infrastructure can support only 2,500 people.

Read the whole report by AreYouSyrious? >>>

In the beginning, the protesters were mainly from Afghanistan, however, after some days more people joined from Iran and shortly after, four people started a Hunger Strike, demanding from the authorities better living conditions in Moria, to lift the geographical restriction and to “Open the Islands”, in order to be able to travel to the mainland Greece, while they will be waiting for the decision on their applications for asylum. Answers from the Asylum office tend to take long time, especially for non-Syrians who are prioritized, and surely if the applicant appeals to the court. 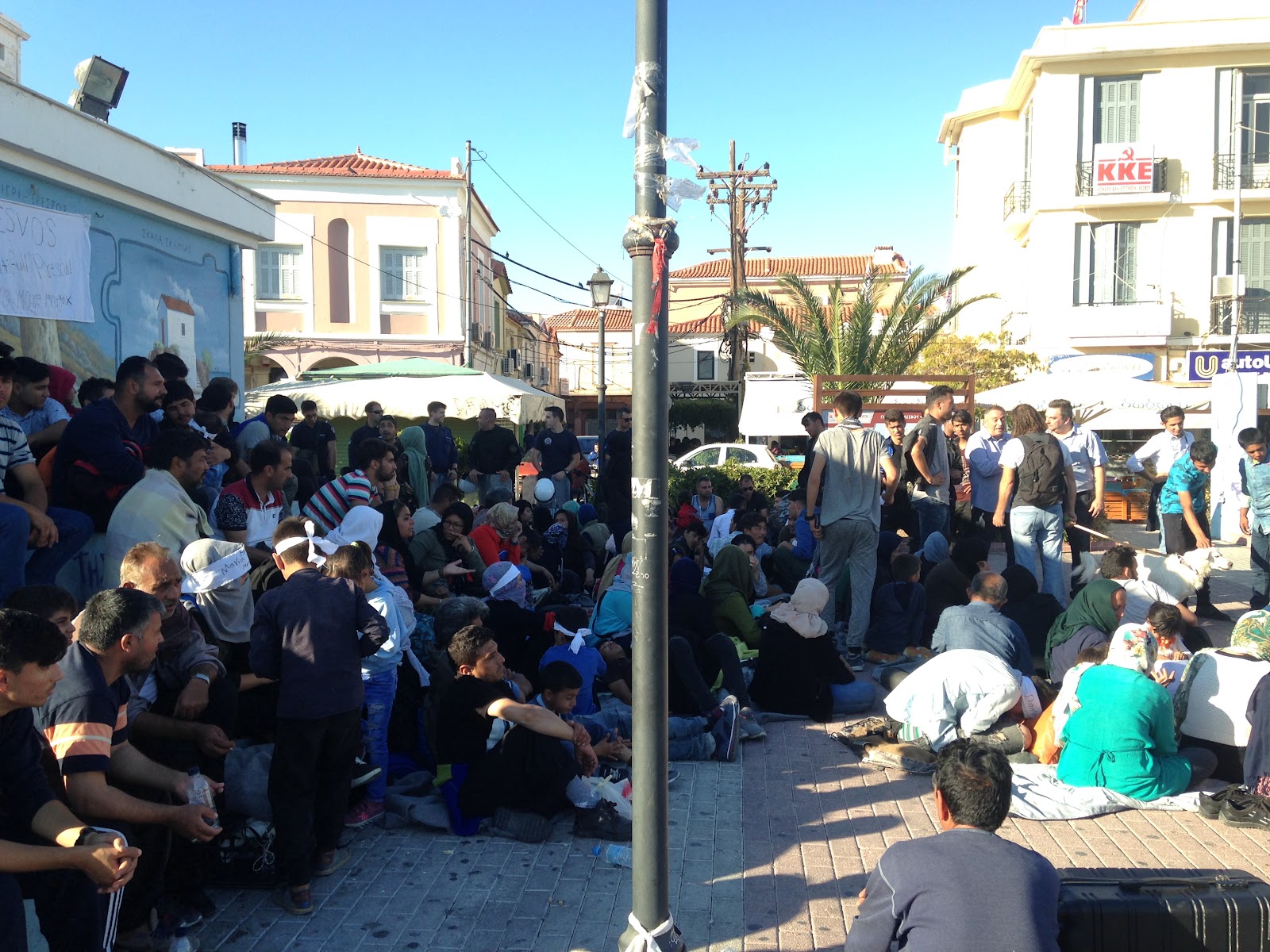 Tweets (below) reporting the initial occupation of the square 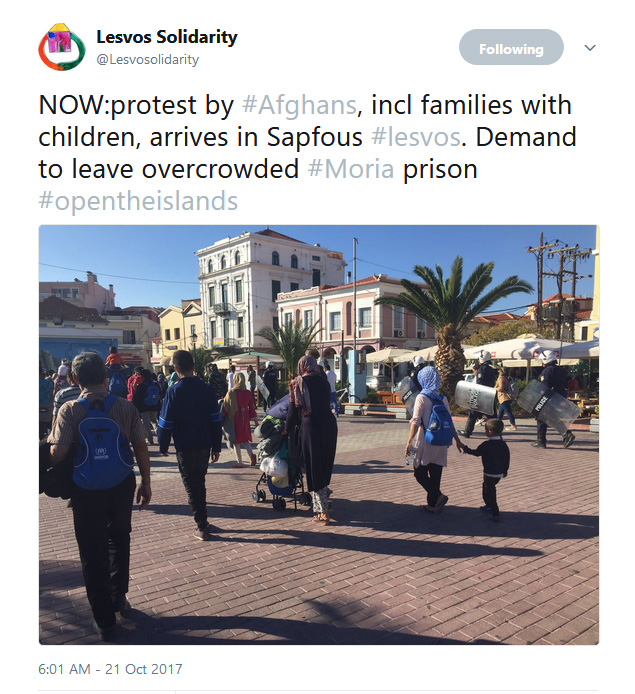 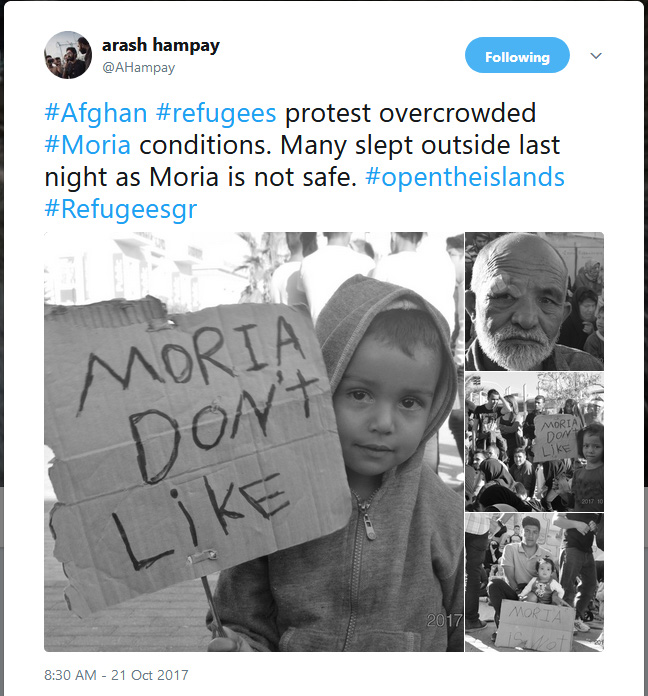 1st Day on the square. Photographs (below) || Observatory of the Refugee and Migration Crisis in the Aegean 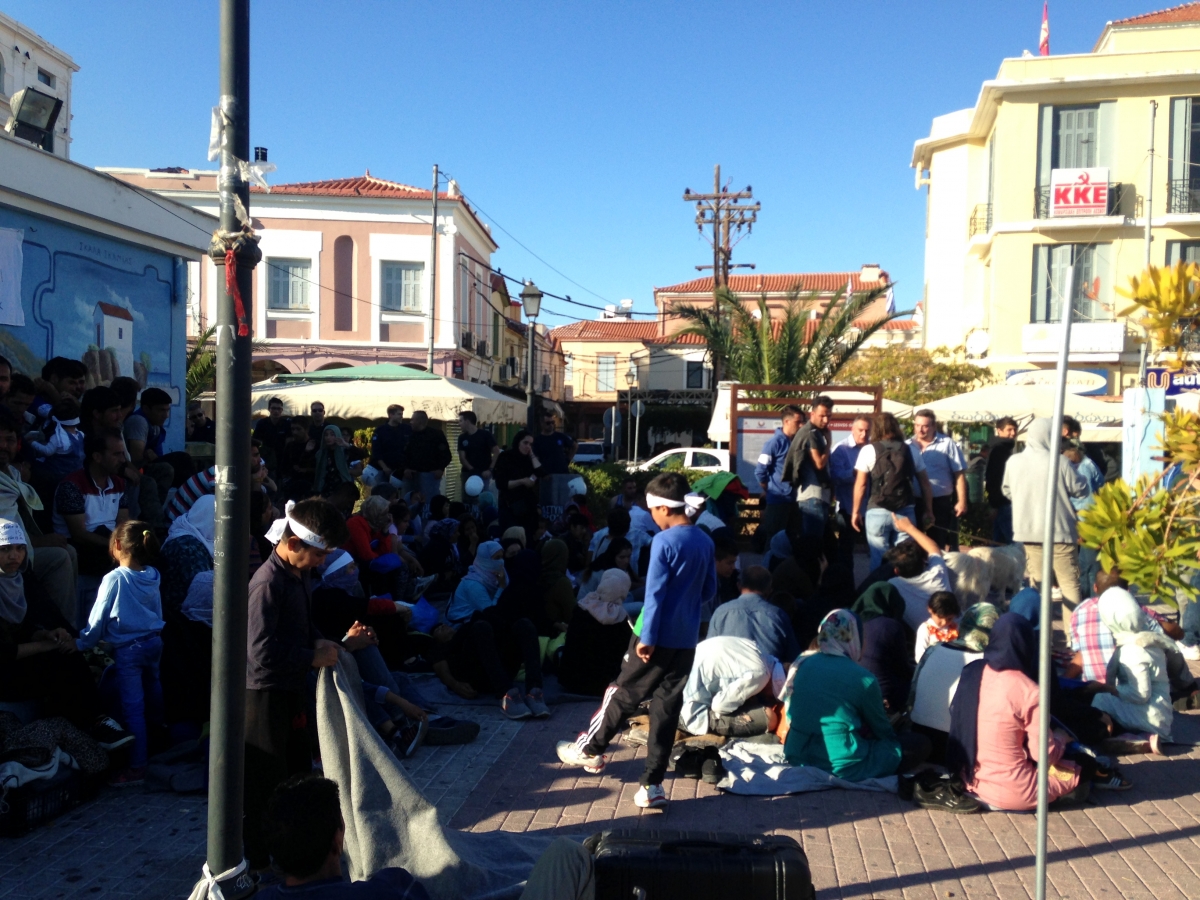 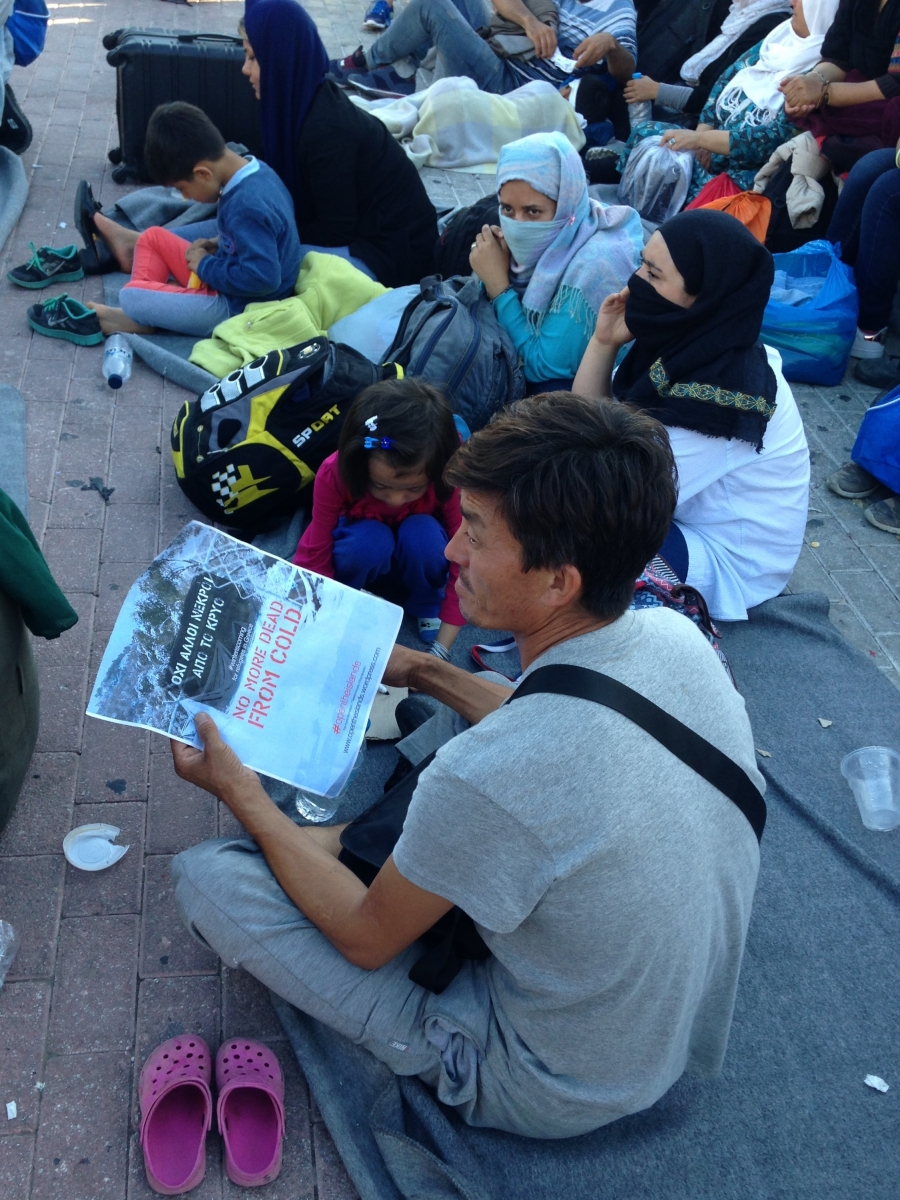 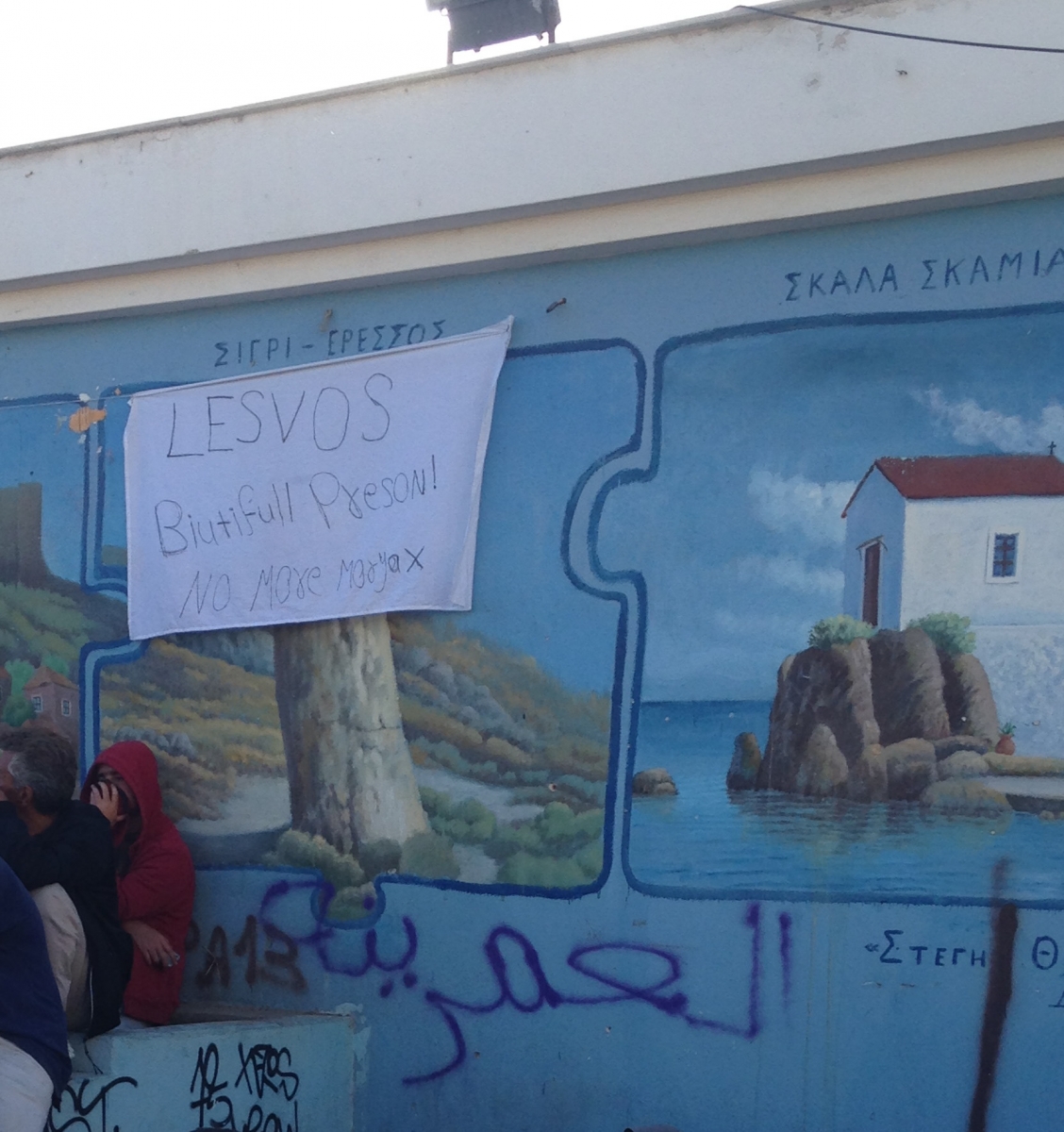 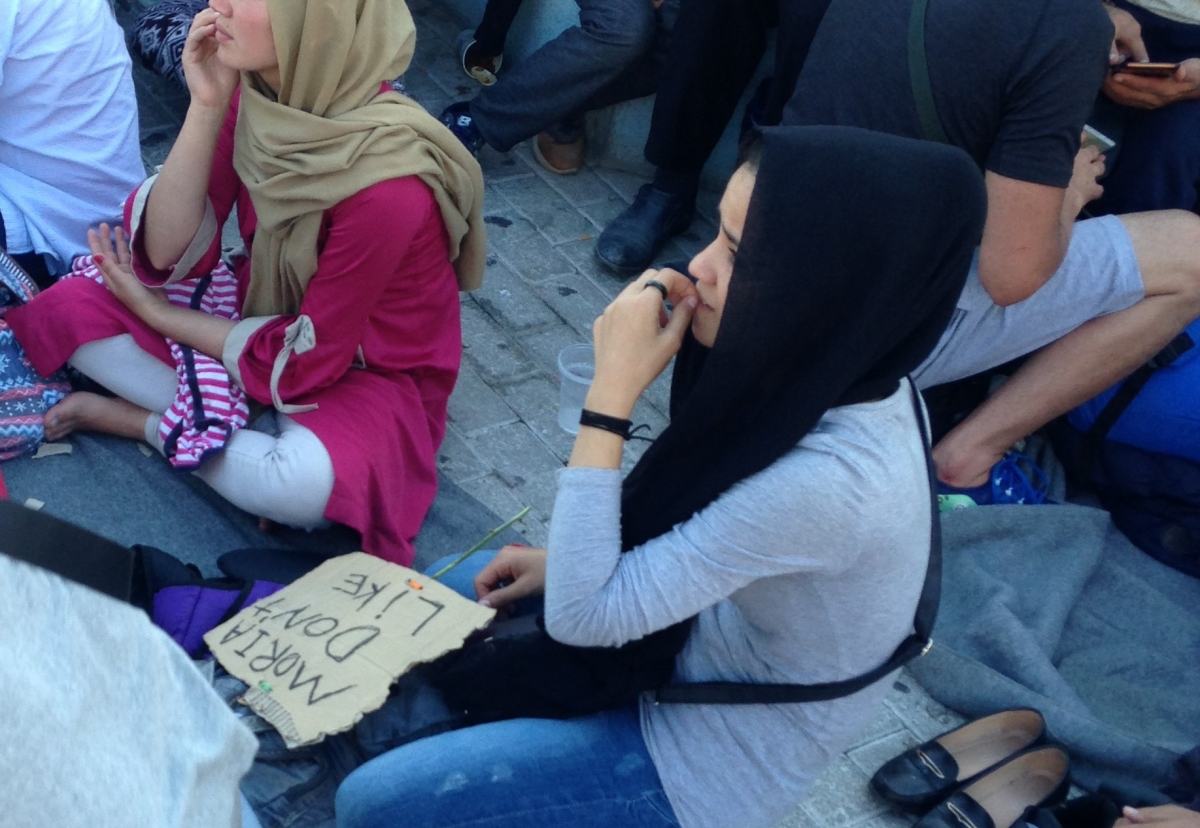 The, so called, geographical restriction that currently applies to all Asylum Seekers who arrive to the Greek Islands (besides the extremely vulnerable cases of Syrians), was one of the results of the E.U.-Turkey Statement. The geographical restriction of the Asylum Seekers to the Islands, especially after the increase of the arrivals since late August (2017), has resulted to the overpopulation of the camps on the Greek Islands, like Moria RIC, causing a deterioration of the living conditions within them. As winter is coming a campaign has started, by several NGOs and collectivities, asking the authorities to ‘open the islands’ (#opentheislands / https://www.cpt.org/cptnet/2017/10/20/cpt-mediterraneanlesvos-open-islands-%E2%80%93-no-more-dead-cold-solidarity-groups-and-org).The Asylum Seekers, who are protesting on Sapfo Square, have joined the campaign, using the hashtag #opentheislands, hoping to raise the issue and get the attention of the authorities.

10th night on the Square. Photographs (below) || Observatory of the Refugee and Migration Crisis in the Aegean 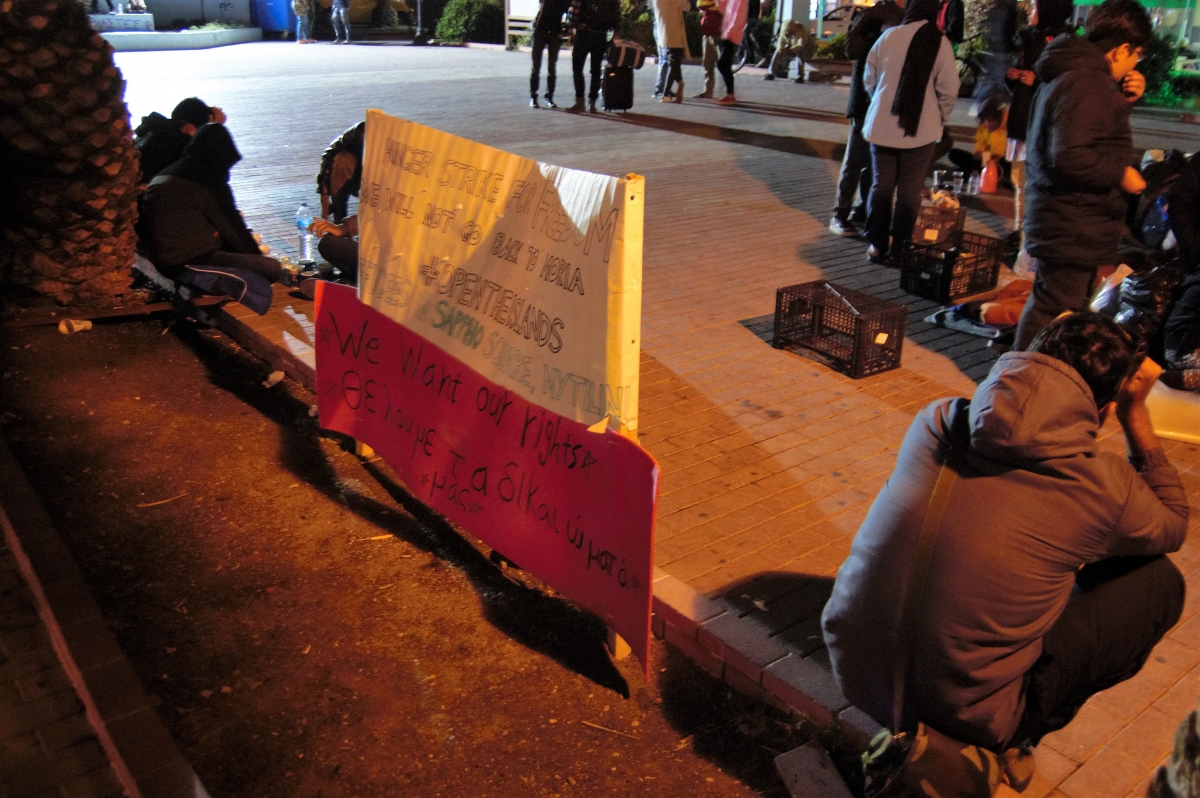 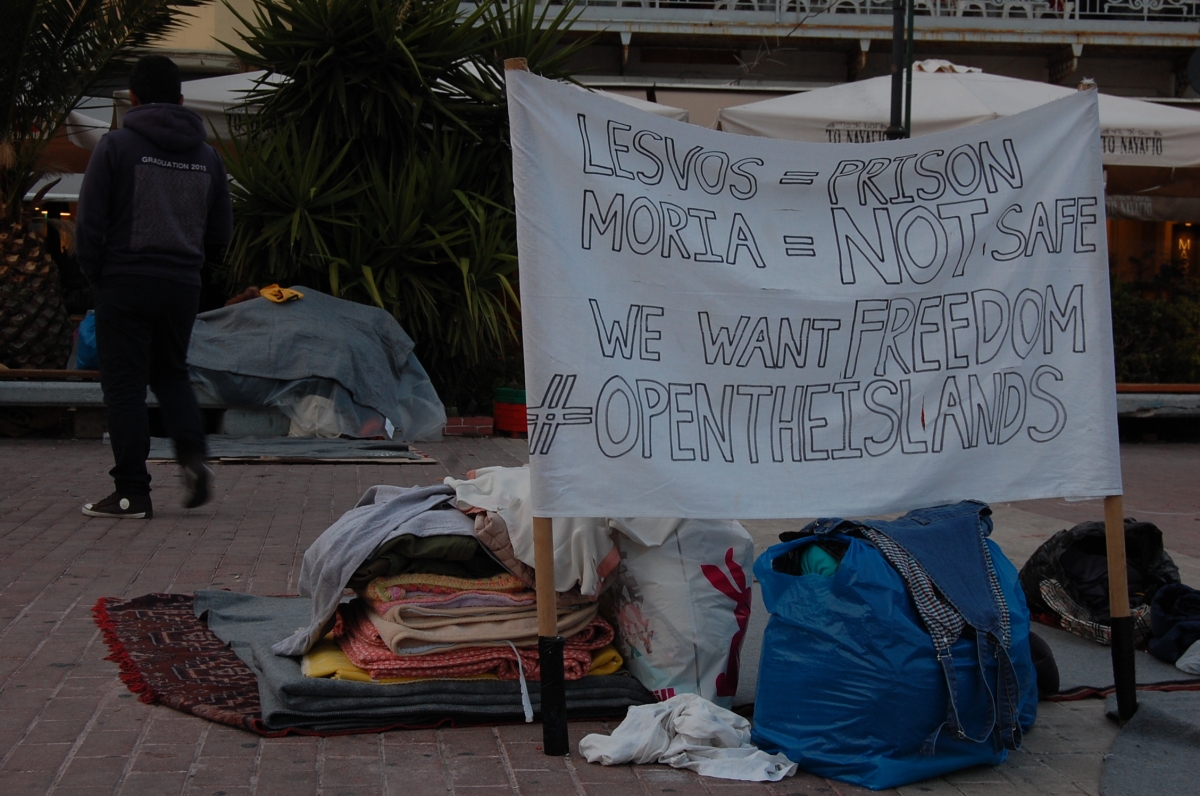 After some days from the initial occupation of the square, local activists who stand in solidarity with the Asylum Seekers’ protest offered them temporary accommodation in two buildings within the city of Mytilene, the Workers Union Club building, at the center of the city, and the “Mpineio” squat, at one of the University’s buildings in the city.

After the temporary hosting of the Asylum Seekers, men, women and children at these two buildings, the protesters returned to the square. In this second occupation of the square the nationality of the protesters changed. Most of the people from Afghanistan and especially some families, who had initially occupied the square, stopped the protest. They seem to accepted the offer that was made to the representative of the Afghani community, by the managers of Moria and Kara Tepe camps, to return to Moria and to be relocated to Kara Tepe camp, in which the conditions are far better. However, according to some of the around 50 people who remained at the square, since the beginning of November only a limited number of families had been relocated to Kara Tepe. At the same time, other Asylum Seekers, mainly from Iran, joined the protest and at the 27th of October four men from Iran started Hunger Strike, adding another character to the struggle.

In the name of ‘The One’ who created freedom,

The European Union has yet to provide the very safety for us refugees that it has become famous for. We have journeyed from famously unsafe places to seek refuge here. We came here seeking a safe harbor and to be respected, and ultimately have yet to experience any such safety in Europe.

WE are free, and no country can dispossess us from our freedom. According to the Refugee Convention that was signed in 1951, freedom is a fundamental right for every refugee, and as a result we have been granted that right to go anywhere we choose in Europe. No country has the right to deport refugees back to their respective country or to another similar unsafe country. No country has the right to torture or imprison refugees. No law permits the violation of human dignity and continuous humiliation. All the self-declared ‘civilized’ countries seem to see themselves as protectors and observers of both human dignity and human rights, with a particular emphasis on the rights of women and children. However reality tells different story. The reality is that from the very first moment we came to Lesvos, a Greek island that is part of the European Union; we have been systematically humiliated and have had to deal with the most grotesque fascist treatment. However, we do not need to write about the happenings inside Moria Camp. A simple search on Google or YouTube will grant you access to whatever information you need. From this you will understand what we are talking about. We consist of men, women and children who have fled from bombs and have ended up in Moria where we are treated like captives in a Nazi-like concentration camp.

We, the refugees without refuge, have fled from Moria and will not return there or to any other camp on Lesvos, for we want Freedom. We want respect for our own human dignity and we want you to follow your own laws. We want you to follow the Universal Declaration of Human Rights and The Refugee Convention of 1951, which you Europeans wrote yourselves.

People of Europe, we are talking to you. WE have come here to seek refuge from you. We have fled from countries that have been haunted and destroyed by authoritarian regimes, exploitation and wars. We considered you to be the prime example of a collective love of civilization and peace. Shockingly however, we have merely been hosted by your cold desolate streets as opposed to your warm embrace.

Have you not seen us these past 9 days? If not, then you should know that we are a group of men, women and children who sleep outside exposed to the rain and cold.

You must accept us as refugees, if not then give us back our freedom of movement. To repeat again, a number of refugees are going to start a hunger strike tomorrow, after another four days a larger number of men and women are going to join if you do not accept our demands.

WE leave you alone with your conscience.

On the Greek island Lesvos refugees are protesting for more than a week now. Some of them started a hunger strike on Friday, others joined over the weekend. One person is  refusing to drink water. They need our support.

Read the rest of the aricle >>> 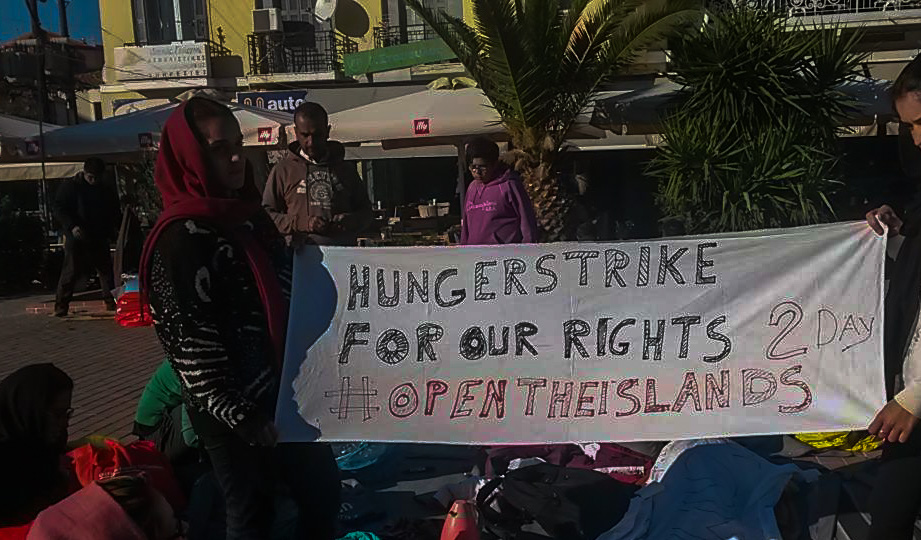 On the 1st of November four women started also hunger strike, among who there are 3 minors - gilrs of the age of 15, 16 and 17 years old. The representative of the protesters on the square, an Iranian asylum seeker and a victim of torture himself, who has been on the island for more than a year, states the demands of the protest in a discussion with the Observatory on the 3rd of November:

The young Iranian, continued our discussion explaining how he came to be the “spokesman” of the protest.

“Unfortunately these people are brought up in a specific way, in dictatorial regimes, so they want somebody else to take the decisions for them. But I always explain -or at least I want to explain everything- to them. I want to take the oppinion from everyone. In the begining nobody explessed their oppinion, nut now they all give their oppinion when we have a meeting. I also encourage the women and children to give their oppinion, in ;order to learn to decide for their lives. One positive thing that happened is that, I wanted to have a leader also from the women, and now we have. She does not have so much experience yet, but everyday she becomes better and I am happy for this. They need somebody to do it until the end, and i can do it because I was involved in activism before. This is why I was arrested by the regime in Iran and I was held a dark cell, while they were beating me up, breaking my teeth”. He says, and he shows me the evidence of torture in his mouth.

The Iranian is also very active on social web, documenting the protest and trying to get as much information out there as he can. In our question if he is afraid, as the authorities know him now, he says that he has gone through a lot back in his country, but he still was involved in activism, so he believes that people should fight for their rights.