Refugee families trapped in Greek Islands are surviving various odds — from tackling violence to rape threats — with the hope that the European Union may agree to assimilate them into Europe. 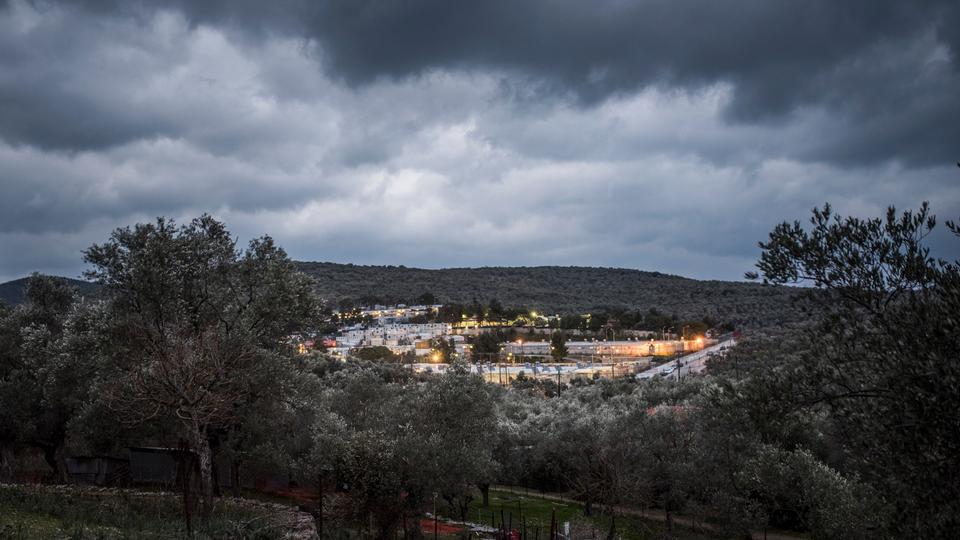 Thousands of refugees, including young children and infants, pregnant women and people with disabilities, have been braving the winter chill with bare minimum resources in several Greek islands.

Ever since the European Union and Turkey signed a deal in early 2016 to stop refugees from entering Europe, the fate of several thousand asylum seekers from Syria, Iraq and Afghanistan is in limbo. They are entrapped in shabby camps in the Greek islands of Lesvos, Chios, Samos, Kos and Leros, unable to move further as the EU refuses to accept more refugees.

In one such shelter in Moria, a village in Lesvos, at least 5,000 people are stuck.  Spyros Galinos, the mayor of Lesvos, recently described Moria as “a concentration camp where all dignity is denied.” 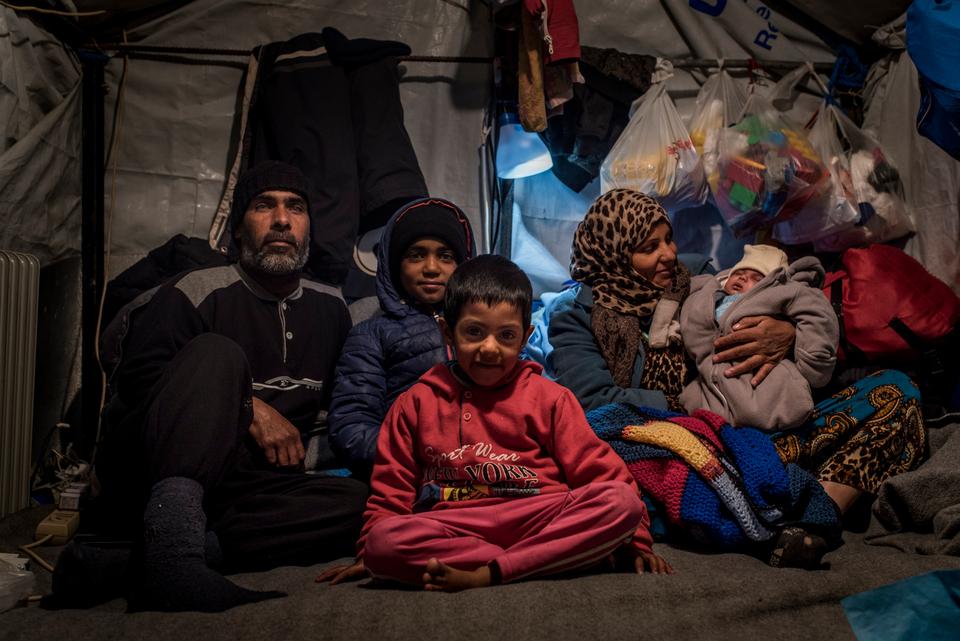 My name is Jassim Ali. I came here with my wife and two kids. We started our journey to Europe soon after the Syrian Regime bombed our neighbourhood a few months ago. They attacked us with artillery, tanks and fighter jets. Our houses were completely destroyed. We literally ran through the desert. We were exposed to many risks on the road, but we somehow managed to arrive here. We ended up paying a lot of money.

My wife Fahima Asseyit was pregnant with Nur, our newborn son. He was born here in Moria camp. My wife gave birth in the absence of doctors and medical attention. As a result, Nur suffered from a birth injury. He broke his leg. His eyes caught some infection and he’s suffering from pain. There is no one to help us here.

That’s why I want to tell my fellow Syrians that it’s better to stay back in Syria than coming here. It’s better to live amid bombs because if Europe is like Moria, we don’t want to seek refuge in Europe. 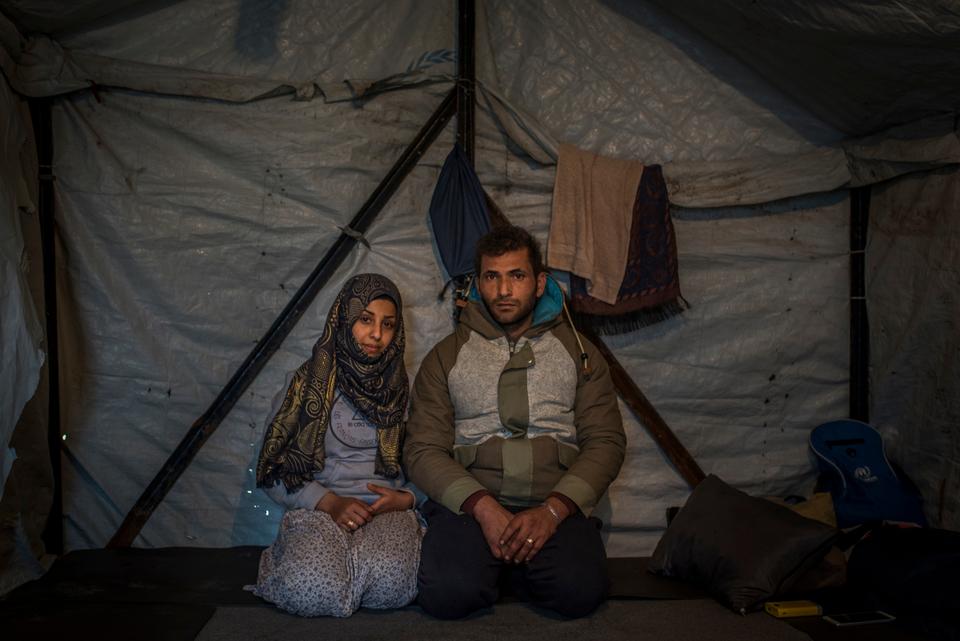 My name is Alaa Aldin, and here’s my wife Bushra. She is five months pregnant. About five months ago, Daesh came to Deir Ezzor, our village in Syria, and destroyed everything.

The entire village is empty now; everyone has left. We made five attempts to cross the border between Turkey and Syria, but it was only when we obtained false ID cards [on the Syrian side] that we managed to cross. It cost us $100 for each ID. My brother and his wife are still trying to cross the border.

We are having massive problems with our documents. They are asking for our marriage certificate but we have never had any formal document that could prove our union. We don't even have our IDs, the Turkish army took them from us as we crossed the border. 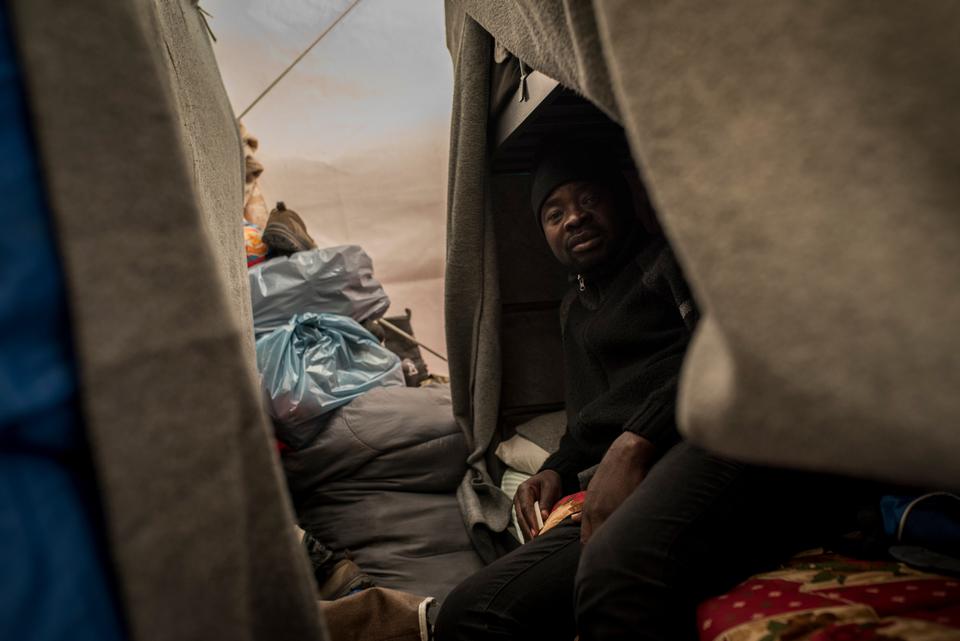 I cannot tell my name, but you can call me "Joachim." I am from Lome, Togo (a tiny country in West Africa). I am a teacher, but I had to leave my country because of my association with a civil rights group aligned with the Pan African National Party (PNP).

On August 19 last year, we held a demonstration across Togo. It turned deadly in the capital Lome. The security forces opened fire at protesters and killed two people. We were just asking for democracy, reinstatement of the constitution that limits the presidential term. But the government launched a violent crackdown. The repression was terrible.

They took me, put me in jail with 25 others. The jail cell was windowless. I spent two days without food and water. There was routine torture. I was electrocuted. On the third night, they took us to some undisclosed location. I was struggling from the effects of torture because I’m a bit old. I am 52 years old, so I was barely conscious, trembling with cold. They took me to the hospital. A policeman saw my condition. He helped me escape the hospital.

Before coming to Europe, I used to teach my students that in Europe people respect other people. I used to tell them that even the idea of democracy came from (Jean-Jacques) Rousseau, and Rousseau was from Europe. 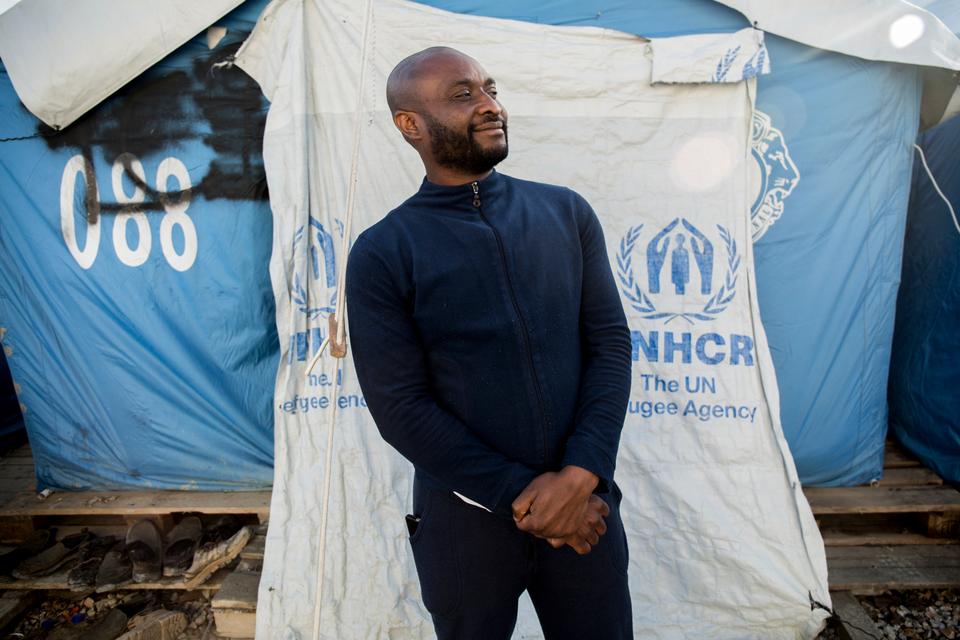 My name is Marcel, and I’m from Bamenda, the English speaking part of Cameroon. I used to work as a stock manager in a commercial company, but I had to leave Bamenda last October after a big demonstration. I crossed Cameroon and Nigeria, most of the time by foot and when I arrived in Algeria, I asked for a visa to fly to Turkey.

Cameroon is 80 percent French, and 20 percent English, and the latter one is facing a deep crisis and a vast oppression. The war is not officially declared, but there is a significant struggle, something very terrible is going on, we are already 20,000 refugees in Algeria.

I left Cameroon in October last year, a year after the struggle escalated. I didn’t feel comfortable anymore. The military occupied the streets of Bamenda. Nowadays, they are shooting people, disappearing them and so on. I’m an English-speaking Cameroonian, and I’m a potential protester. So automatically I’m the target.

The English speaking part became independent by joining the French. So two entities going together on some basic agreements written in a constitution: to respect each other’s identity and culture. But as the time went on, the French-speaking part wanted to re-colonise the English one. We were discriminated against in a country where we are living together since 1961, and we couldn't continue in that way.

I still have flashbacks, bad headaches, I’m suffering from post-traumatic stress disorder, and I don’t sleep well at all. The memories are killing me. 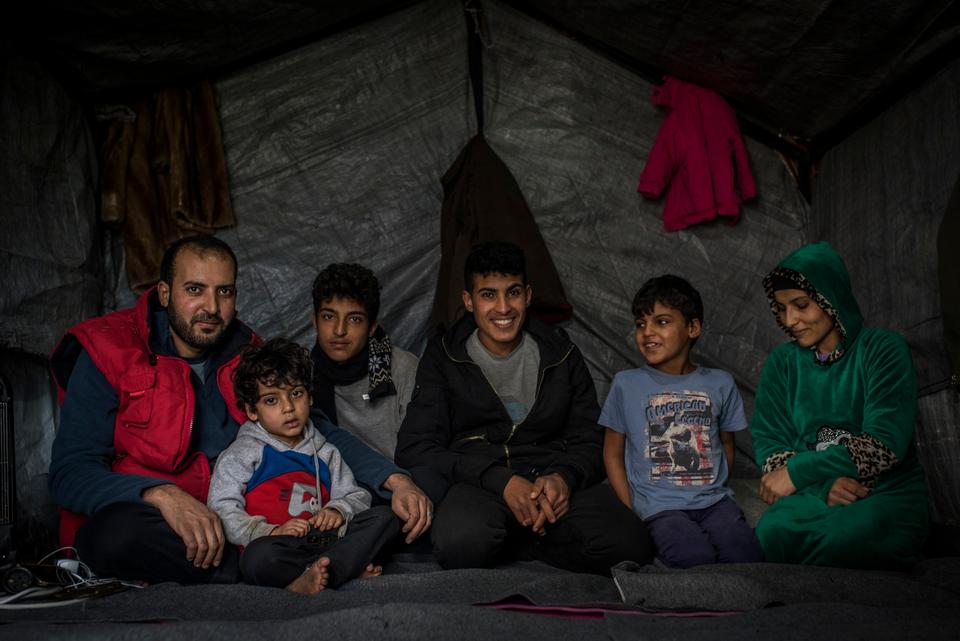 My name is Kassim Hussein al-Ali, and I’m 38 years old. I escaped Syria two months ago with my wife and three children. We lost our seven-year-old daughter in a clash between the regime forces and Daesh, so we were forced to leave our city. And I arrived at Lesvos with my family. I used to work in Syria as a driver in a microbus.

The camp is very noisy and crowded though. We have to share a tent with two or three families. 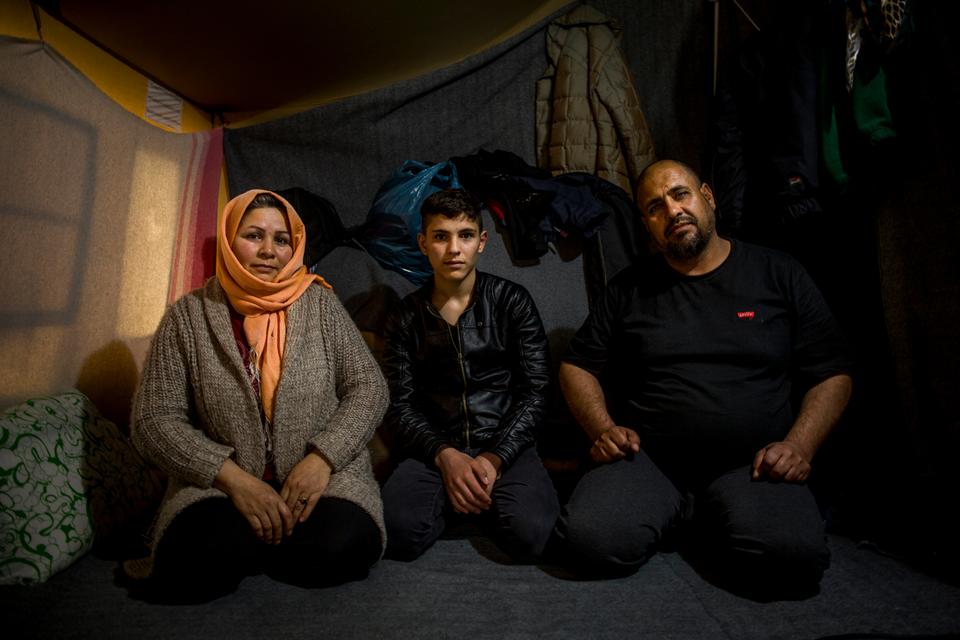 I am Shar Ali. I’m 47 years old and I’m from Ghazni, Afghanistan. I’m travelling with my wife Laila and Ali, her sister’s son. We are taking care of him because his family escaped to Europe in a rush after a Taliban attack. They have reached Sweden.

We’ve been living in Iran for the last 12 years until we had enough money to start a journey to Europe. The Taliban forced us to leave our country.

We arrived in Moria two months ago and it’s been quite difficult for us. I’m sick. My heart is supported by a pacemaker and it’s working slowly. I have had two heart bypass surgeries. Now I’m scared of dying here in Moria. There’s no healthcare facilities here. There’s a shortage of medical supplies. I don’t know where to find my medication.

The only solution doctors give us is to share an isobox (a refugee tent) with 15 more people. There’s no place inside the tent where I can rest or sleep well. I struggle to breathe inside. Most of the people are smoking all the time. Two weeks ago I suffered another heart attack. The ambulance arrived two hours late. I could have died, but I stayed strong. I had no other choice.

In Moria people fight all the time. I’m scared something can happen to us. My worst nightmare is if someone attacks us, I cannot defend my family. I’m no longer strong enough. 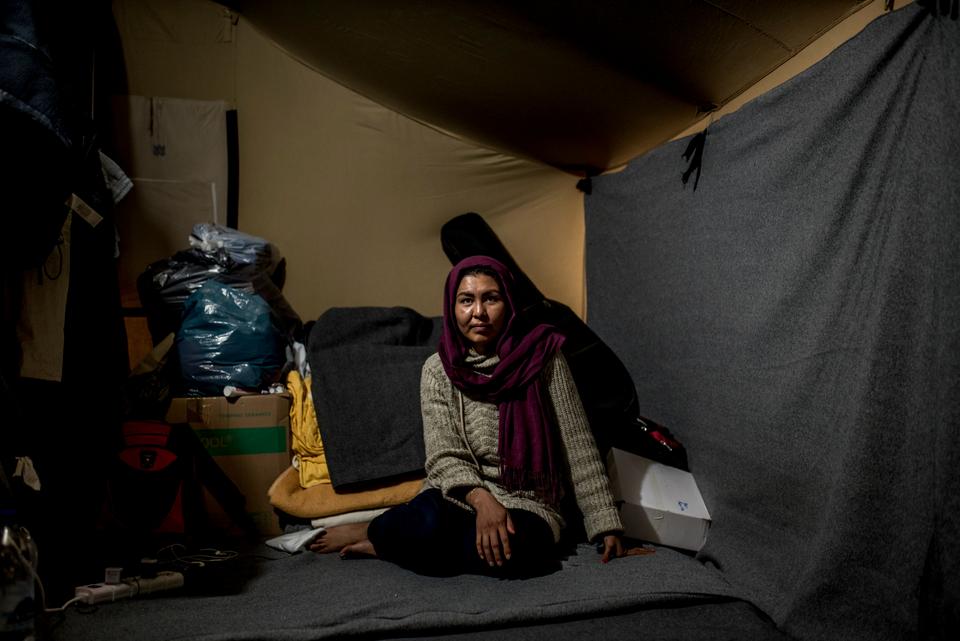 My name is ZK. I would prefer not to give my full name as the mafias that chased me back home are also looking for me in Europe. I am 25 years old, and I come from Afghanistan. I left my country because I was threatened by the gangs of my town, Herat, where I worked as a police officer. One day one of the gangsters asked me to do bad things, but I refused.  Ever since, they have made my life difficult.

So far the journey to Europe has been quite hard. As a woman, we are exposed to many threats. Mainly when you deal with smugglers. A lot of women are sexually abused. For example, if you don’t know them they will threaten you with abandoning you in Turkey. It’s common for them to push you to have sex with them.

Here in Moria, after 9 pm, I cannot go alone to the toilet. Men get drunk, they fight violently. It’s dangerous.

This place is full of rats and fleas. I want to get out of here. The only way is to pay $6,000 to smugglers, who can get you a flight ticket, visa and fake passport. All the land routes are closed. But I don’t have that much money. 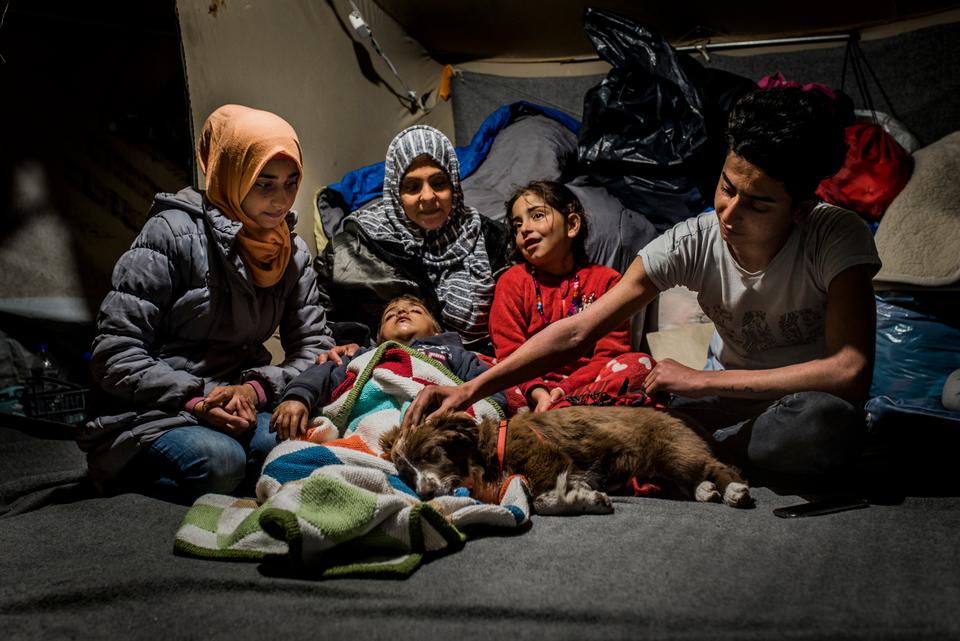 My name is Minah Hose. We left Iraq three months ago. My son, Leith, was kidnapped there. His captors cut one of his fingers. The moment he returned we left the country. My husband was murdered a few years ago. I keep telling my younger children, Geith and Farah, that their father has been kidnapped. But my daughter Miriam knows that her father is dead.

We were living inside the Moria camp until recently. We had to move out because someone stole all our money, $867 (700 euros). Moria is not good. It’s cold and men are always looking for trouble. One man tried to rape my daughter when she was on her way to the bathroom. Now she is so scared to step out.

I came to Europe looking for a safe place for my kids, but Moria is not safe, and we are exhausted. People are always stealing, taking drugs, and harassing women.

All I want is safety and education for my children. Leith wants to be a doctor. Miriam wants to be a journalist. We always thought that Europe means humanity, but we haven’t seen it. 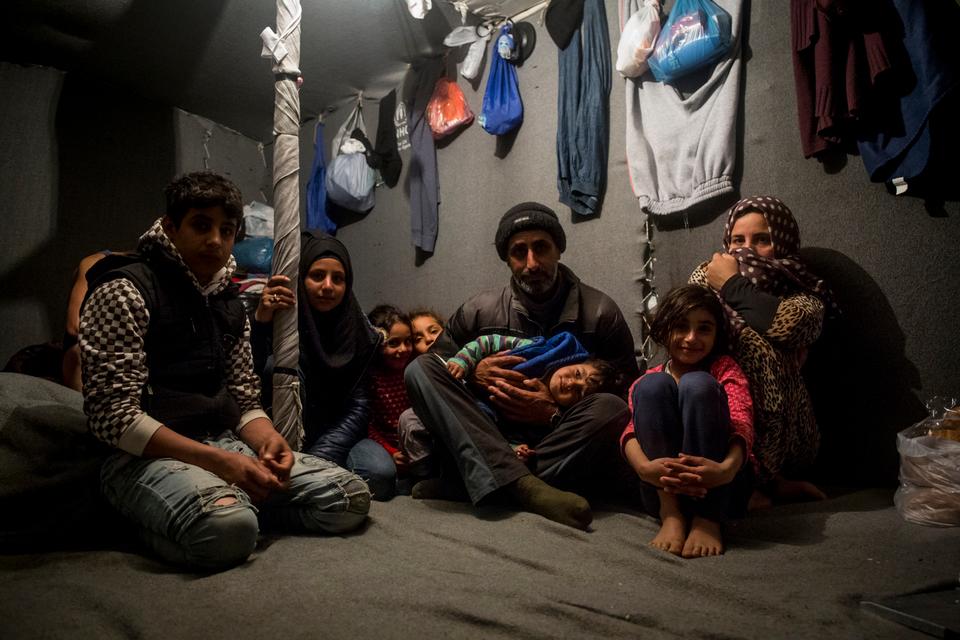 My name is Majid Sali. I’m 42 years old, and she’s my wife Malka Alisa. We had to leave Deir Ezzor city in November 2017 because of the war. Our house was destroyed, and we were forced to leave Syria. I escaped with her and my seven kids while the regime was bombing the city.

We live outside of Moria because when we arrived here the camp was already full. I had to buy some tarpaulin and other material to build this tent.

I don’t know if I want to go to Germany or stay in Greece. The only thing I know is that we cannot go back. 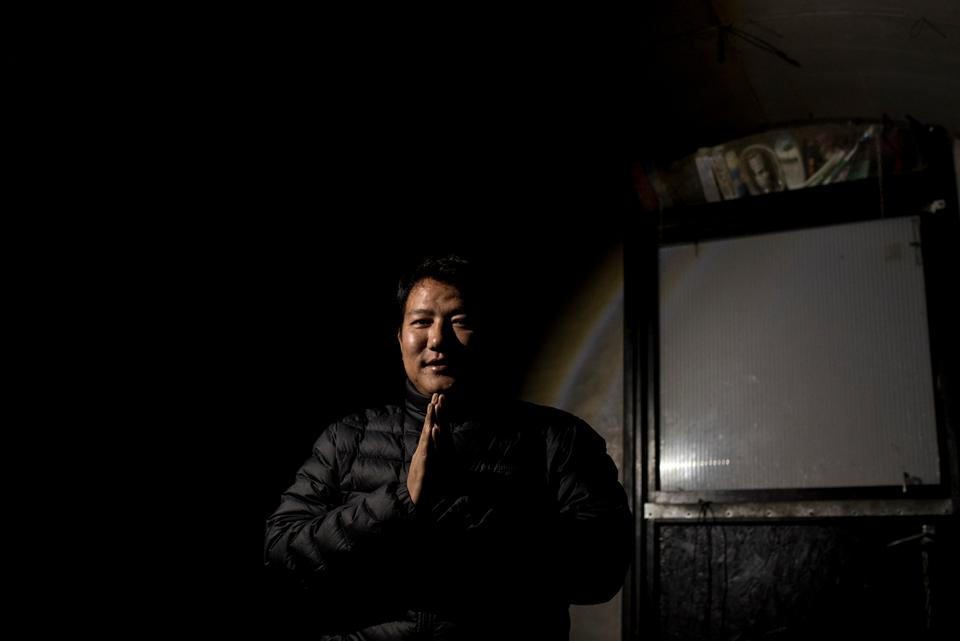 My name is Deepak Gurung. I am from Nepal. I came to Moria in October 2016 with a group of 42 Nepalis. I am the last Nepali left in Moria. All the others have left with voluntary deportation after their asylum was declined. Mine was declined too, but I spent more than $19, 825 (16,000 euros) to reach this spot, and I’m not going to quit until I make it to Europe. I hope to make it to France where my uncle lives.

We left our country because our houses were destroyed in an earthquake. I have nothing left back home. Sometimes I miss home. I think about my house. From its attics, I used to watch the Himalayas. My wife and I used to go trekking to the nearest Poon hill. Here in Moria, I often go fishing in Panagiouda. It’s the only place of calm in Moria.