Open the islands – No more dead from cold

Six people who were seeking refuge and protection in Europe died in Moria last winter, their deaths linked to inhumane winter living conditions. Their families are still waiting for answers from the authorities as to how and why their relatives died, and for those who are responsible to be held accountable. Only last Sunday 8 October, a five-year-old Syrian girl died in Moria. The cause of death is yet unknown.

The collective of solidarity groups and organisations, expresses their shock and outrage at the current situation in the islands as winter sets in. Approximately 5000 people currently live in Moria camp, which has a capacity of around 2000. This includes the seriously ill, the disabled, pregnant women, many children including unaccompanied minors, and survivors of torture and other trauma. Many now live in woefully inadequate summer tents and have to sleep on the floor on thin sleeping mats or blankets. Likewise, the other Greek hotspot islands – Samos, Chios, Kos and Leros – are dramatically overcrowded, leaving 8000 more asylum seekers without appropriate shelter. The so-called hotspots are currently uninhabitable and to date a clear plan to prevent the tragedies of last winter from being repeated has not been released.

“Living in Moria makes us all sick. In the morning you wake up in a cramped tent or container between other people. It smells disgustingly and I hate that I cannot wash myself properly. In winter it is freezing. Everything is soaked. When you wake up you cannot move your limbs. And you’re covered in ashes. Last winter we burned paper and plastic to stay warm. It is as if we were not human beings.”

The collective stresses that the current situation is not caused by the onset of winter or a sudden increase of arrivals. Rather, it is a direct result of the EU-Turkey Statement and EU asylum and migration policies of exclusion. These policies keep people trapped on the islands for prolonged periods of time, prevent people from ever reaching Europe, and prevent people who are eligible for relocation and family reunification from moving on to other countries in a reasonable time.

Everybody knows that winter is coming. 700 million Euros have been made available to the Greek authorities to manage the situation. As a collective, we want details as to how and where this money is being spent. We also urgently demand that the several relevant actors in the Greek government, at national and local level, assume and clearly communicate their responsibilities. They must then be held accountable for what will happen to refugees and migrants this winter in Greece. The ongoing practice of dodging blame and responsibility for the systematic violation of refugees’ rights in the Greek hotspots is unacceptable and has to stop. It is the role of the prime minister to ensure that all levels of the government function and are held accountable. We call on Prime Minister Alexis Tsipras to clarify the responsibilities of different actors both locally and nationally, and to present a plan for winter.

Likewise, we condemn all the European governments who have created the EU-Turkey Statement and who put pressure on Greece to implement the EU-Turkey Statement, through the European Commission and other channels. The Statement prioritises maintaining Fortress Europe over all else, trampling roughshod over international human rights law. All European governments share the responsibility for the human rights violations suffered by refugees in Greece today, for those deaths that have already occurred, for those which could follow this winter.

It is with great interest that we have taken notice of the various statements by UNHCR, municipalities, and RIC staff, sounding the alarm over the current situation in the Greek islands. But without action, these statements are empty. We need solutions and immediate action from all responsible actors, including UNHCR, whose mandate is to provide international protection and seek permanent solutions for problems faced by refugees.

We call on Prime Minister Alexis Tsipras to:

clarify the responsibilities of different actors both locally and nationally, and to present a plan for winter.

We call on the Greek government, at local and national level, to:

We call on the European Commission to:

We call on the European Union Member States to: 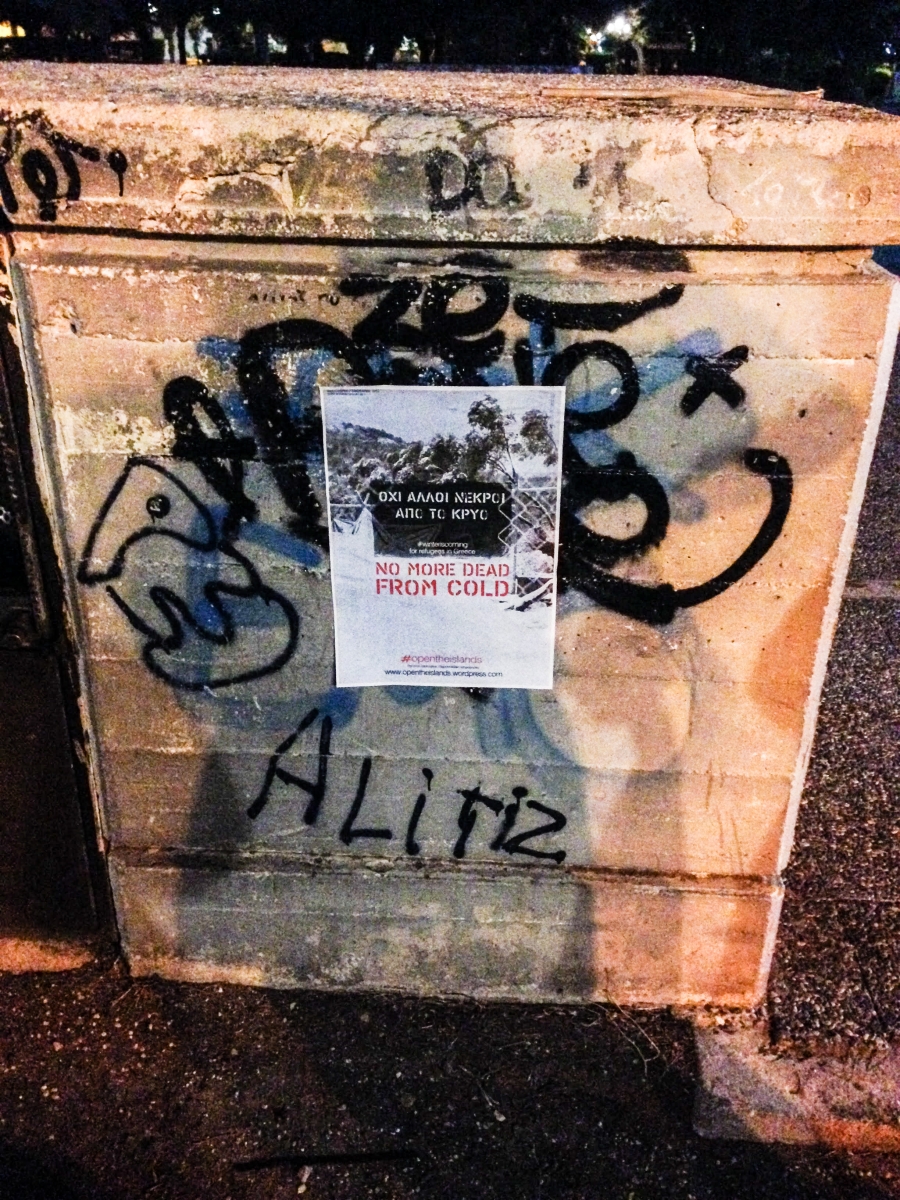 Image: The poster of the campaign #opentheislands on Aghias Eirinis park in Myrtilene, Lesvos || Refugee Observatory